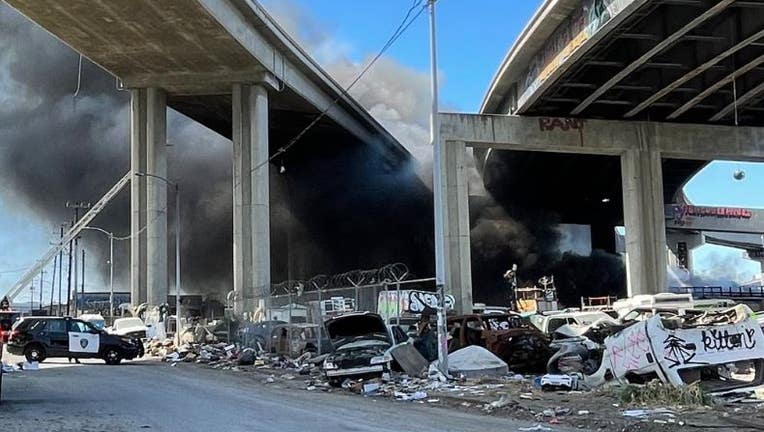 Emeryville police help out with a fire at a homeless encampment in Oakland at 34th and Wood streets. July 10, 2022

OAKLAND, Calif. - The governor's office on Thursday sent a letter to the City of Oakland addressing its concerns over the city's handling, or lack thereof, of a homeless encampment that has seen several recent fires.

As a result, the city could lose millions of dollars in state funding.

The state claims that Oakland is shirking its responsibility of providing shelter and housing assistance to unhoused residents at the Wood Street encampment, where a string of fires have erupted.

The state said it has allocated $4.7 million in funding to the city over the last two years to address those issues, by housing those at the encampment, but Oakland is dragging its feet.

The encampment is located in District 3. City Councilmember Caroll Fife represents that district. In May, she pushed for a homeless shelter at a former Oakland Army base that would house up to 1,000 people. At the time, the councilmember said the parcel of land had been vacant for more than 10 years.

"We need accommodations now," Fife had said. Fife's community liaison said District 3 has the most homeless encampments in the city.

The letter stated local governments generally have the responsibility for providing shelter and re-housing for people who are homeless, while Caltrans is a transportation agency. It has no authority to provide housing or shelter to the public, the letter said.

"To be clear, there is no such thing as a 'resident of Caltrans,' as the city's position suggests," the letter from Ann Patterson, legal affairs secretary in Newsom's office, states.

KTVU has reached out to city officials for comment, but the city attorney has not yet responded.