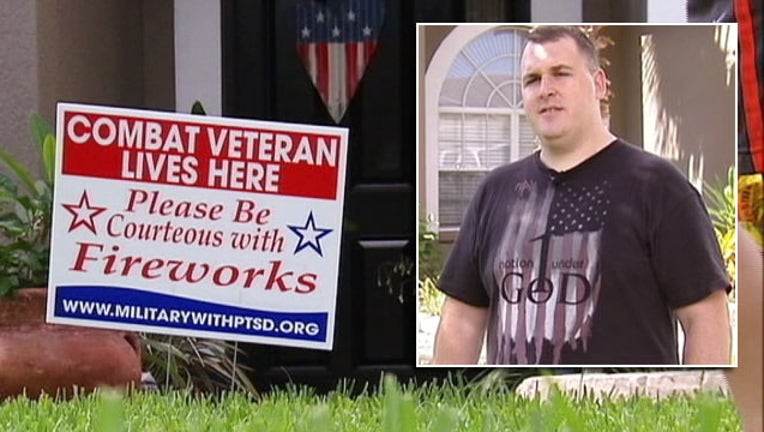 VALRICO, FL (FOX 13) -- A medically retired Army staff sergeant is preparing for the Fourth of July differently than many Americans.

He'll start off by celebrating with his wife and two children. But as the sun begins to set and the fireworks begin to go off, you won't find Russell Cook Jr. outside anymore.

"When things start to get a little bit hairy, I'll probably put on some headphones and listen to some music," he said.

That's the cruel irony for someone suffering from post-traumatic stress: the day we celebrate our freedom is a nightmare for Cook and other combat veterans like him.

"It brings back some of the -- what I like to call -- the parts of hell for me, things I don't really like to remember but I tend to think about each day because it's hard to keep them suppressed," Cook told FOX 13.

During Cook's nine years in the Army, his unit was attacked more times than he can remember. They were also hit by four separate roadside bombs.

"There was an explosion, maybe five, ten feet from me," he said. "It was a well-coordinated attack by the enemy and I think we were really lucky to get out of there."

Cook's said his experiences include "seeing things that I don't wish anyone else to see."

Some of his worst memories flood back when he hears the explosions of fireworks during Independence Day and the days surrounding it.

"They just fire off fireworks at all times during the day and night, so it's just for that week and week after, it is hell for me," he said.

Cook is trying to make his community aware. He posted a sign in his front yard that reads, "Please be courteous with fireworks."

The organization that makes the signs, called Military with PTSD, has sent out about 2,500 this year, including roughly 100 to people in Florida.

Dr. Ashley Vigil-Otero, a Clinical psychologist in Tampa, said some not everyone realizes how devastating fireworks can be to veterans with PTSD.

"It can be significantly anxiety-provoking. It can be something where they can have a full-blown panic. It can even really feel like they're back in that moment and re-experiencing the trauma," Vigil-Otero said. "Some people might just be increasingly anxious or hyper-vigilant, on alert, whereas others can really be triggered into a flashback or panic."

Cook doesn't want anyone to put off their celebration, but would rather they think about the veterans with PTSD who might be living nearby.

"I'm not asking anybody to stop celebrating but it's senseless, I think, to fire fireworks for two, three weeks straight," he said. "Try to keep it to the Fourth of July."