On Monday, June 134, 2022, a Yellowstone park helicopter flew overhead to capture a paved road, eroded and washed out in due to high water levels in adjacent river. Video was filmed by Yellowstone's helicopter manager.

HELENA, Mont. - Communities bordering Yellowstone National Park were isolated and tourists stranded Tuesday after record floodwaters knocked out roads and bridges in Montana and Wyoming and forced the closure of all entrances to the park.

In an alert posted Monday, the park said, "All inbound traffic through all entrances is closed at this time due to extremely hazardous conditions from unprecedented amounts of rainfall. Roads in the northern portion of the park are also closed due to heavy flooding and rockslides."

The flooding followed a torrent of rain that combined with a rapidly melting snowpack and came just as the summer tourist season was ramping up.

While numerous homes and other structures were destroyed, there were no immediate reports of injuries. Yellowstone officials said they were assessing damage from the storms, which washed away bridges, caused mudslides and forced evacuations by boat and helicopter.

It’s unclear how many visitors are stranded or have been forced to leave the park and how many people who live outside the park have been rescued and evacuated.

Some of the worst damage happened in the northern part of the park and Yellowstone’s gateway communities in southern Montana. National Park Service photos of northern Yellowstone showed a mudslide, washed out bridges and roads undercut by churning floodwaters of the Gardner and Lamar rivers.

The flooding cut off road access to Gardiner, Montana, a town of about 900 people near the confluence of the Yellowstone and Gardner rivers, just outside Yellowstone’s busy North Entrance. Cooke City was also isolated by floodwaters and evacuations were also issued for residents in Livingston.

Officials in Park County, which encompasses those cities, said on Facebook Monday evening that extensive flooding throughout the county had made drinking water unsafe in many areas. Evacuations and rescues were ongoing and officials urged people who were in a safe place to stay put overnight.

The Montana National Guard said Monday it sent two helicopters to southern Montana to help with the evacuations.

Cory Mottice, a meteorologist with the National Weather Service in Billings, Montana, said rain is not in the immediate forecast, and cooler temperatures will lessen the snowmelt in coming days.

"This is flooding that we’ve just never seen in our lifetimes before," Mottice said.

The Yellowstone River at Corwin Springs crested at 13.88 feet (4.2 meters) Monday, higher than the previous record of 11.5 feet (3.5 meters) set in 1918, according the National Weather Service.

At a cabin in Gardiner, Parker Manning got an up-close view of the water rising and the river bank sloughing off in the raging Yellowstone River floodwaters just outside his door.

"We started seeing entire trees floating down the river, debris," Manning, who is from Terra Haute, Indiana, told The Associated Press. "Saw one crazy single kayaker coming down through, which was kind of insane."

On Monday evening, Manning watched as the rushing waters undercut the opposite riverbank, causing a house to fall into the Yellowstone River and float away mostly intact.

Floodwaters inundated a street in Red Lodge, a Montana town of 2,100 that’s a popular jumping-off point for a scenic, winding route into the Yellowstone high country. Twenty-five miles (40 kilometers) to the northeast, in Joliet, Kristan Apodaca wiped away tears as she stood across the street from a washed-out bridge, The Billings Gazette reported.

The log cabin that belonged to her grandmother, who died in March, flooded, as did the park where Apodaca’s husband proposed.

"I am sixth-generation. This is our home," she said. "That bridge I literally drove yesterday. My mom drove it at 3 a.m. before it was washed out."

On Monday, Yellowstone officials evacuated the northern part of the park, where roads may remain impassable for a substantial length of time, park Superintendent Cam Sholly said in a statement.

But the flooding affected the rest of the park, too, with park officials warning of yet higher flooding and potential problems with water supplies and wastewater systems at developed areas.

Vistors who planned to visit the park was urged to check the National Park Services website here for the most up-to-date information on the park's status.

In south-central Montana, flooding on the Stillwater River stranded 68 people at a campground. Stillwater County Emergency Services agencies and crews with the Stillwater Mine rescued people Monday from the Woodbine Campground by raft. Some roads in the area are closed because of flooding and residents have been evacuated.

"We will be assessing the loss of homes and structures when the waters recede," the sheriff’s office said in a statement.

The flooding happened while other parts of the U.S. burned in hot and dry weather. More than 100 million Americans were being warned to stay indoors as a heat wave settles over states stretching through parts of the Gulf Coast to the Great Lakes and east to the Carolinas.

Elsewhere in the West, crews from California to New Mexico are battling wildfires in hot, dry and windy weather.

KTVU also contributed to this story. 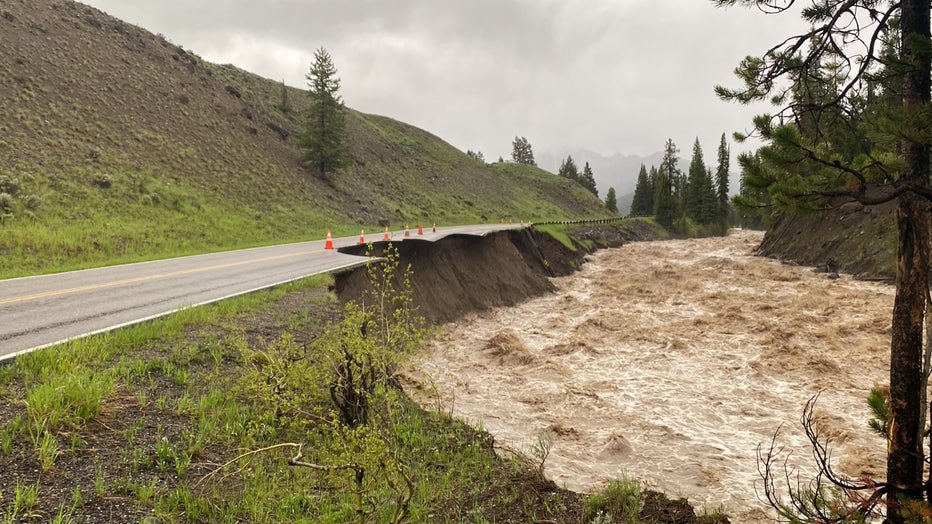 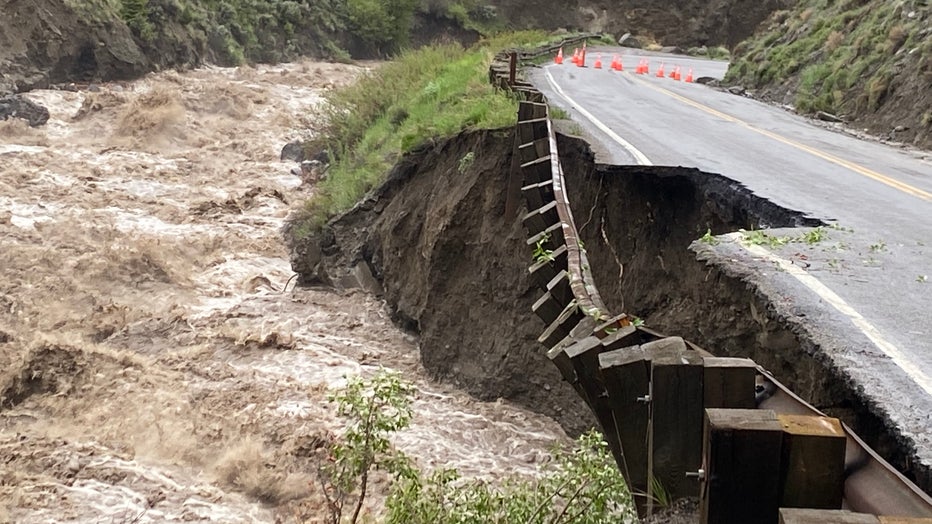