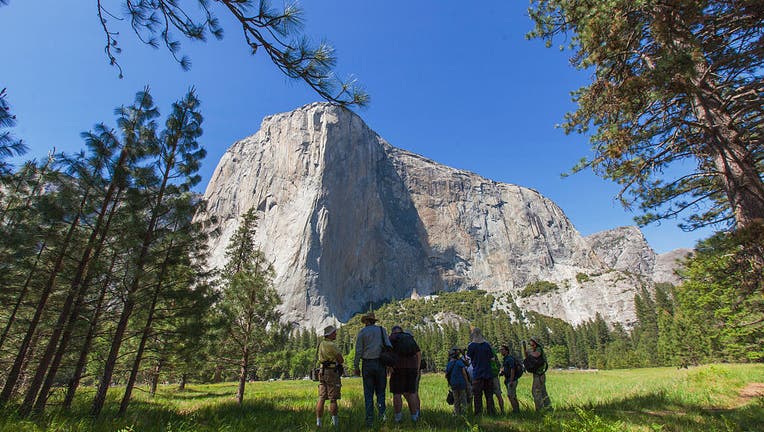 Photographers on a meadow, El Capitan is pictured in the background. Spring time in the Yosemite Valley located inside the Yosemite National Park. (Photo by Ted Soqui/Corbis via Getty Images)

The park added red tape to cut through before climbers can begin the physically grueling and mentally demanding feat of inching up vertical granite walls that take days to conquer and require spending the night suspended on tiny platforms hundreds or thousands of feet above Yosemite Valley.

Climbers will need to secure free permits before they can attempt multiday climbs on El Cap, Half Dome, the Leaning Tower and other big climbs beginning May 21.

The long-rumored plan will inevitably cause grumbling in the birthplace of American climbing and among a culture that embraces freedom. But it could help limit the number of climbers on classic routes that have become more crowded as the sport has grown exponentially in popularity.

"I think we’re going to have a lot of climbers whining and complaining because they were gifted this thing that they think is a right and it was really a privilege," said Hans Florine, who with 170 ascents, has climbed El Cap more than anyone. "We were given incredible rag-tag Wild West privileges for the last 40 years in Yosemite. All they’re asking is to let us know you’re there."

The two-year pilot program will put climbers on par with backpackers who have been required to get wilderness permits for decades to spend the night in protected backcountry areas of national parks and forests. Unlike hikers, though, the climbing permits will not at first be rationed on a quota basis that limits how many people can be on a designated route each day.

Jeff Webb, the wilderness manager for Yosemite, said the program will measure for the first time how many people are doing overnight or multiday climbs to see what areas are getting the most use and could eventually lead to limits on certain routes, such as The Nose on El Capitan.

The park will seek voluntary compliance but could fine climbers who break the rules, Webb said.

Yosemite is not the first park to require permits for multiday climbs. Zion National Park in Utah and the Black Canyon of the Gunnison and Rocky Mountain National Parks in Colorado also have permit systems.

Daniel Duane, a climber and author of "El Capitan: Historic Feats and Radical Routes," said there was a certain sadness to the development because it was a reminder of an era when Yosemite's signature climbs weren't crowded.

Some climbers used to camp for months in the park and climb every day. City dwellers could call a friend on Thursday to plan a last-minute trip, drive all night from San Francisco or Los Angeles and hit the rock on Friday morning.

"One of the kind of weird and wonderful mysteries of Yosemite forever has been that you could just show up there," he said. "You could drive up to the base of El Cap ... and start climbing. And the Yosemite Valley climbing lifestyle has been kind of a miracle in that way."

But the rise of climbing gyms has created a huge generation of new climbers that has led to the sport being included in the summer Olympics this year for the first time. Films about the feats of a few rock stars on El Capitan have captured the imaginations of moviegoers and put them on the edge of their seats as if they were standing on sliver-width ledges and gripping tiny cracks on the sheer monolith thousands of feet above the valley.

When Duane was planning an overnight climb with this daughter last year on the south face of Washington Column, friends warned that they wouldn’t be alone. He heard stories of five parties being on the route and five more waiting in line to start climbing.

Although he canceled the trip because of the coronavirus pandemic, he said that type of situation "sucks for all parties involved."

While he's not opposed to the change, Duane said permit reservations required four to 15 days in advance will remove any spontaneity and will be seen as another slap by climbers who have often been odds with the park administration.

"Climbers are not crazy to have felt that some really substantial part of park culture just wishes they would go away," he said. "This little step, as benign as it seems and, frankly, as sensible as it seems, definitely raises those concerns for all of us."

Corey Rich, cinematographer of "The Dawn Wall," who has spent his professional career hanging off the side of Yosemite's largest cliffs as an adventure photographer, said the move would be polarizing among climbers.

The loss of freedom is a bummer for him but it seems like a necessary evil as the sport evolves and grows and will help protect the walls they all cherish.

"I'm also one of these old dogs that will have to learn the new trick of how to apply for a permit the next time I go up El Cap," Rich said.