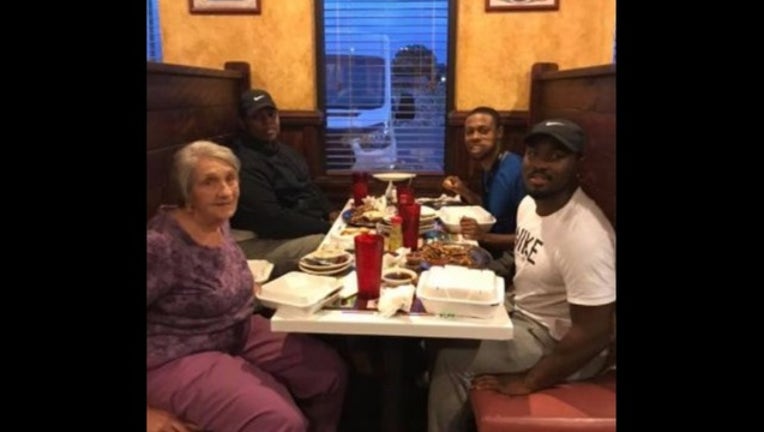 OXFORD, Ala. (KTVU) - "Always be kind and be nice to people. You never know what they are going through." That was the take-away from a young man in Alabama who paused a moment to invite a stranger to sit and eat with him and his friends.

Last Thursday, Jamario Howard said he and two pals were at a restaurant when he noticed an elderly woman at a nearby table. She was sitting alone.

The sight stirred something in the young man. He posted the ensuing encounter on Facebook where his story has been liked more than 131K times and shared 35K times.

In his post, Howard explained how he found himself thinking, “'dang I’d hate to have to eat alone.'” So he promptly got up, walked over to the woman and asked if he could sit with her.

"She said yes and we talked for a minute and after a while of talking she told me she lost her husband and that tomorrow would have been their 60th anniversary," Howard wrote.

The young man followed up by offering his condolences and then invited the woman to join him and his friends at their table, an offer she gladly accepted.

The newly formed group shared stories and a meal and something more.

While the woman may have been feeling like she gained something among the company of strangers who were there to listen, Howard was quick to note that he came away with a perspective altering lesson.

"This woman changed my outlook on life and how I look at other people," he wrote. "Everyone has a story so do not judge!"

Howard's story has moved many, with thousands of people taking to Facebook, thanking Howard for illustrating how a simple act of kindness can go a long way.

"We are really all the same," Lee Wheeler commented. "We all need to be loved and heard. We are all going through the same issues and its good to see how people can stop and help someone else along the way feel not so alone."

Brenda Lievers wrote, "God bless you, your friends and the wonderful lady. People don't want to be around you when you are old. You never know what a show of kindness can do for the lonely."

Howard's encounter with the woman also prompted him to pass along some advice. He reminded folks to take opportunities to spend time with those they love.

"...people i can’t stress this enough," the young man said, "GO SEE YOUR MOM AND YOUR GRANDPARENTS. They miss you!!"