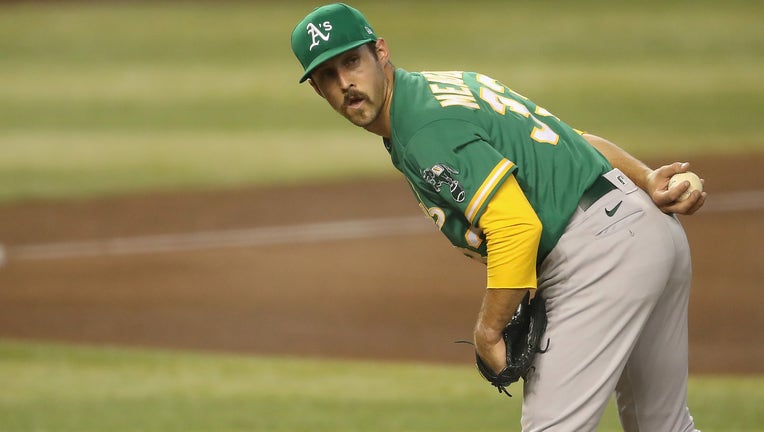 PHOENIX, ARIZONA - AUGUST 18: Relief pitcher Daniel Mengden #33 of the Oakland Athletics pitches against the Arizona Diamondbacks during the MLB game at Chase Field on August 18, 2020 in Phoenix, Arizona. (Photo by Christian Petersen/Getty Images)

OAKLAND, Calif. - Athletics right-hander Daniel Mengden has tested positive for the coronavirus and is quarantined at home in Houston, where he received the result that forced Oakland and Major League Baseball to postpone four games this week.

A's general manager David Forst said Thursday that Mengden is asymptomatic and was placed on the 10-day injured list. The A's added new left-hander Mike Minor to the 40-man roster after acquiring him Monday in a trade with the Rangers.

“He continues to be asymptomatic and feels good,” Forst said while discussing Mengden on a conference call.

The team had its three-game series at Seattle this week postponed as well as last Sunday's scheduled series finale at Houston, where the A's learned late Saturday of the one positive test. Forst said the A's left Houston in two groups, the second being those who had close contact — up to 15 minutes — with Mengden in the 48-hour window during which he tested positive.

“Without a doubt, these guys are serious about it and they understand the ramifications,” manager Bob Melvin said Thursday. “It doesn’t surprise me we haven’t (had further positive tests). This wasn’t something Daniel broke away from protocol, just an unfortunate incident and our guys continue to be diligent about it and very serious.”

The A's don't know how Mengden contracted the coronavirus. There haven't been additional positive tests within the traveling party.

The A's returned to the field at the Coliseum for workouts Wednesday with another session scheduled Thursday as they prepare to host the Padres beginning Friday night. Minor is slated to be available out of the bullpen.

“It’s a new challenge in a year of new things and challenges,” Forst said.