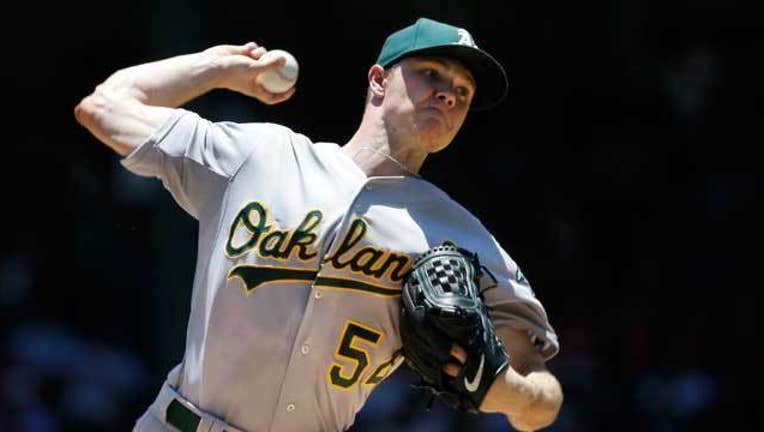 Reddick had a two-run single with two outs in the seventh immediately after Ben Zobrist drew a bases-loaded walk off Sam Freeman to break a 3-3 tie. Reddick's sac fly an inning earlier had tied the game.

Gray (9-3) struck out seven and walked three over six innings, improving to 5-0 with a 0.96 ERA in his five road starts against the Rangers. The right-hander had allowed only one run in 31 1-3 innings the previous four starts, including two shutouts last season.

Oakland has won nine of its past 11 games, and is headed home for a weekend series against the Royals. They had a contentious series in Kansas City in April when the benches cleared in all three games.

The Rangers have lost five in a row for the first time under new manager Jeff Banister.

Tyler Clippard worked a perfect ninth for his 13th save in 15 chances. The right-hander hadn't pitched since Saturday and Sunday, when he was the first A's reliever since 1996 with saves of three or more outs on consecutive days.

Keone Kela (4-5) got the first two outs of the seventh before consecutive singles and giving way to Freeman, who failed to retire any of the three batters he faced.

Mitch Moreland had three hits for Texas, including his ninth homer leading off the fourth and an RBI single the following inning.

Rangers starter Colby Lewis had walked only two batters his previous 33 innings before three walks in the fifth to load the bases.

Oakland loaded the bases again with three consecutive singles, two of them infield hits, to start the sixth. Reddick's sac fly tied the game before Lewis' 100th and final pitch, a grounder that ricocheted off his foot to second baseman Rougned Odor for an inning-ending 1-4-3 putout.

Billy Burns' single in the seventh extended his hitting streak to 15 games. The rookie center fielder has hits in 27 of his past 28 games.

Athletics: Stephen Vogt started his 48th game at catcher, his first since a cortisone shot Sunday in his left elbow. He played first base in his return Wednesday.

Rangers: OF Delino DeShields (left hamstring strain) will work out for the third consecutive day on Friday, and if all goes well will start a rehab assignment Saturday. He has been on the DL since June 15, and the earliest he could come back would be Tuesday. ... RF Shin-Soo Choo was back in the lineup after missing two games with lower back spasms.

Athletics: Oakland goes home for 10 games, part of a stretch playing 15 of 18 games at home. The exception was the series in Texas. Jesse Hahn, 4-1 with a 2.25 ERA his past six starts, is scheduled to pitch Friday against Kansas City.

Rangers: Texas, 22-17 on the road, opens a three-game series at Toronto with right-hander Nick Martinez on the mound.