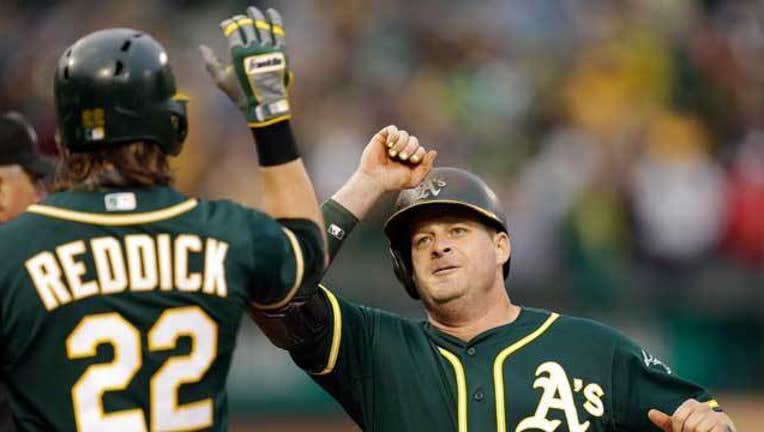 OAKLAND, Calif. (AP) — Josh Reddick had four hits with a homer and three RBIs and Stephen Vogt also homered to help the Oakland Athletics snap a six-game losing streak with a 9-2 victory over the Boston Red Sox on Tuesday night.

Marcus Semien homered and Eric Sogard drove in three runs to help the A's snap their longest losing streak since 2012.

Drew Pomeranz (2-3) faced the minimum 15 batters through five innings and matched the longest outing of his career. He allowed two runs and four hits in seven innings to win for the first time since his opening start of the season, April 10 against Seattle.

Justin Masterson (2-2) failed to make it out of the third inning in his own personal house of horrors. He allowed six runs and six hits in 2 1-3 innings and fell to 0-6 with a 7.26 ERA in eight appearances at the Coliseum.

The A's struck early against Masterson with Semien hitting a triple in the first and scoring on Reddick's single. Vogt's career-high tying ninth homer made it 3-0.

Sogard added an RBI double in the second and Reddick homered to lead off the third. Masterson was replaced by Steven Wright after walking Vogt with one out in the third.

Sogard added a two-run single that inning and Semien led off the fourth against Wright with his sixth homer to make it 8-0.

Pomeranz got plenty of help from his defense. Coco Crisp started it when he threw out Dustin Pedroia from left field trying to stretch a single into a double in the first inning. Crisp also made a twisting, acrobatic catch to rob Mike Napoli of an extra-base hit in the second and Vogt and center fielder Sam Fuld also had diving catches.

The sharp defense helped overshadow Crisp's rough start to the season at the plate. After starting the season on the disabled list recovering from elbow surgery, Crisp is hitless in his first 25 at-bats. The drought goes back to last season as Crisp has no hits in his past 38 regular-season at-bats — tied for the second-longest hitless stretch in Oakland history to Jose Canseco's 40 at-bat drought in 1986.

Semien did make a throwing error in the seventh. That marked Oakland's 10th straight game with an error and the team's major league worst 35th on the season.

Red Sox: RF Shane Victorino started for the second straight day since coming off the DL on Monday with a strained right hamstring.

Athletics: INF/OF Ben Zobrist took live batting practice for the first time since having surgery last month to repair torn cartilage in his left knee. ... 1B Ike Davis did not start a day after leaving the game with a strained left quadriceps muscle.

Red Sox: Wade Miley (1-4) who has lost his last three starts with a 7.63 ERA makes his first career appearance against the A's in the series finale.

Athletics: Look for their first home series win of the season behind ace Sonny Gray (4-0). Oakland was 0-3-1 in its first four series at home this year.