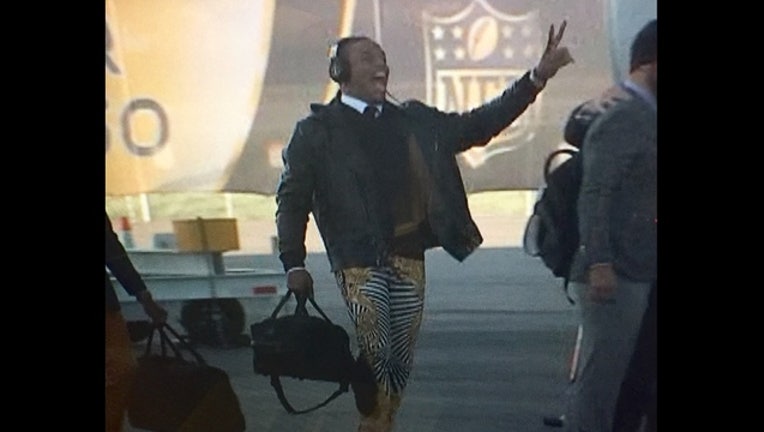 SAN JOSE (AP/KTVU) - SAN JOSE, California (AP) — Cam Newton went with zebra stripes instead of a Panther theme on his trip to the Super Bowl.

Newton and the Panthers touched down at the Mineta San Jose International Airport at approximately 4:15pm Sunday afternoon.

Carolina's star quarterback likes to do his own thing. Newton not only leads his team in dabs, sideline cheers and photo shoots, he apparently likes to dress for an occasion — or create one.

The Panthers winged their way to the West Coast on Sunday, and Newton already created a stir by showing up to board the team bus in Charlotte, North Carolina, wearing zebra-print jeans.

He still had them on when the team landed late Sunday afternoon.

The black and white striped pants, overlaid with an intricate gold pattern from hip to ankle, had Twitter abuzz in the hours leading up to the Panthers' arrival for next Sunday's Super Bowl against the Denver Broncos.