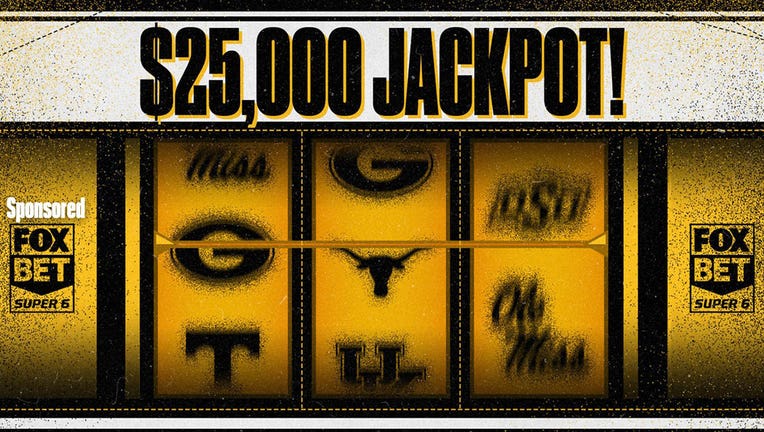 At every turn on the college football wheel, there was some sort of drama. Alabama falling to Texas A&M. Oklahoma’s incredible comeback against Texas. Iowa’s rally to down Penn State.

This week's slate doesn’t have the same marquee matchups, but there are some sneaky-good contests that could shake up the College Football Playoff landscape.

Saturday is another chance to win with FOX Bet Super 6. Pick the winners of all six marquee games with their margins of victory, and you could win the grand prize of $25,000. It’s fast, and it’s free, and all it takes is downloading the FOX Super 6 app on your phone or mobile device.

Here is a look at Saturday’s games.

Five of the top 10 teams in the latest AP poll are from the Big Ten. The most surprising could be the Spartans, who begin their real gauntlet in two weeks, when they host Michigan in East Lansing. Late November games at Ohio State and Penn State also will test the Spartans. Indiana will be without quarterback Michael Penix Jr.

These two teams are still licking their wounds at the hands of Georgia. The Tigers' offense did muster 318 yards of offense, and Bo Nix was able to have Auburn break into double figures against the Bulldogs last week, but they still lost by 24. Meanwhile, Arkansas’ loss two weeks ago appeared to throw the Razorbacks off. It was followed by a 52-51 loss to Ole Miss last weekend, and defense was a mystery. Arkansas was one of the great stories in the country through September. October has not been kind.

Big Noon Saturday is in Austin, where the Longhorns have to wonder what it was that ran over them last weekend after Oklahoma’s amazing comeback win. Casey Thompson has been great at preventing turnovers for most of the season as Texas’ quarterback, throwing only three picks compared to 14 touchdowns. Meanwhile, Oklahoma State just finds ways to win. The Cowboys haven’t played a tough road game yet, however, and that could be the difference here.

One of the best stories to this point of the season has been Kentucky’s emergence in the SEC. The 42-21 win over LSU last week verified the win over Florida the week before. Georgia, though, is on a completely different level. The Bulldogs' defense has yielded just 201 yards of total offense per game this year. In other words, Mark Stoops’ crew is good. Kirby Smart’s team might be all-time legendary.

Lane Kiffin returns to Knoxville, where he is still vilified for walking out on the Volunteers. The bigger story, though, is the Rebels' ability to generate a ton of offense under the guidance of Heisman candidate Matt Corral (almost 1,500 yards, 12 TDs). Don’t sleep on Hendon Hooker and the Vols' offense, which is averaging 41.5 points per game and almost 475 yards per contest. A good, old-fashioned shootout awaits Saturday night at Neyland Stadium.

Pac-12 after twilight heads to the Pacific Northwest with two puzzling teams. UCLA wasn’t exactly awe-inspiring early last week in a win. Washington, meanwhile, is coming off a bye after losing at Oregon State. The Huskies haven't looked like the cohesive unit everyone has expected over the years. One area to keep in mind: Washington has allowed just two passing touchdowns this season.