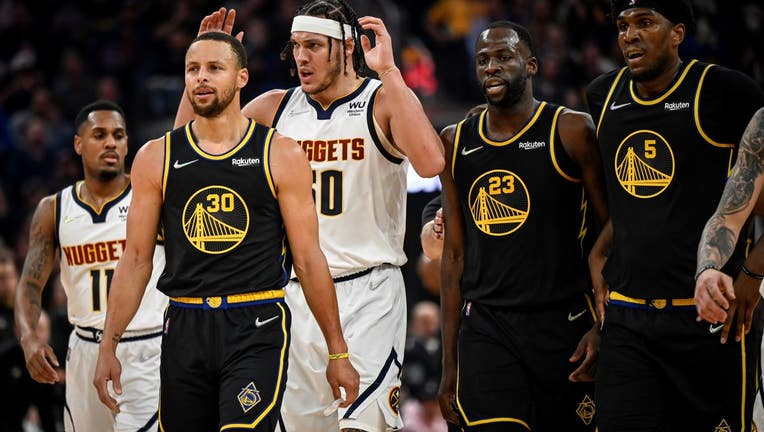 SAN FRANCISCO , CA - APRIL 27: Aaron Gordon (50) of the Denver Nuggets throws up his hands after dunking on a downed Draymond Green (23) and earning a technical foul during the first quarter at Chase Center on Wednesday, April 27, 2022. (Photo by AAr

SAN FRANCISCO - Back in the starting lineup at last, Stephen Curry took over late and brought his team back just as he has so many times during Golden State's deep postseason runs.

Curry scored 30 points in his return to the starting five and the Warriors beat Nikola Jokic and the Denver Nuggets 102-98 on Wednesday night to end their first-round series in five games.

Curry scored 11 points during the fourth quarter after the Warriors began the final 12 minutes down by eight. The two-time MVP converted a three-point play with 1:33 left and scored again with 29 seconds remaining to help send the Warriors on to the second round in the Western Conference.

"I was a witness, letting him cook, create plays for him. Try to get him open looks and after that, you know what he does," Warriors guard Gary Payton II said.

Jokic scored 12 of his 30 points in the final 3:46 and finished with 19 rebounds and eight assists.

The Warriors -- thriving with the support from their raucous home crowd in their first close-out playoff game at Chase Center -- advanced to play the winner of the Memphis-Minnesota series led 3-2 by the Grizzlies heading into Game 6 on Friday in Minneapolis. The Grizzlies eliminated Golden State in the play-in round last year.

Jokic tied it at 90 on an 18-footer with 2:26 remaining before Payton made a layup moments later. Payton also hit a go-ahead 3-pointer from the corner in front of Denver's bench with 6:57 left to put Golden State up 86-84. He finished with 15 points.

"He was incredible, both ends of the floor, big shots, big plays," teammate Draymond Green said.

Payton found his dad, Gary Payton, after the final buzzer just for a quick hello.

Jokic converted two free throws with 3:46 left after Green's foul the Golden State defensive star wanted called on the 7-footer. Jokic wound up 12 for 18 from the floor. DeMarcus Cousins contributed 19 points off the bench against his former Golden State team, and Aaron Gordon added 15 points and nine rebounds.

Curry shot 10 of 22 with five 3-pointers. He came off the bench in the first four games, with the series beginning one month from when he sprained a ligament in his left foot March 16 against Boston.

Kerr challenged the Warriors to "get back to being us." They had given up 30 points off 15 turnovers and committed 27 fouls that led to 36 free throws for Denver in a 126-121 road loss Sunday.

Green had 11 points and six assists. His three blocked shots moved him past Kevin Garnett for 22nd on the NBA's career postseason list.

"I feel like he's built for the playoffs," Kerr said. "This is what he's all about, when you can actually exert the energy that he exerts and the competitive force and get a day off the next day and not have three games in five nights in every city."

After the game, Green found Jokic for a word.

"I told him, `Thank you for making me better,"' Green said. "It's an honor to play against someone so talented, so skilled."