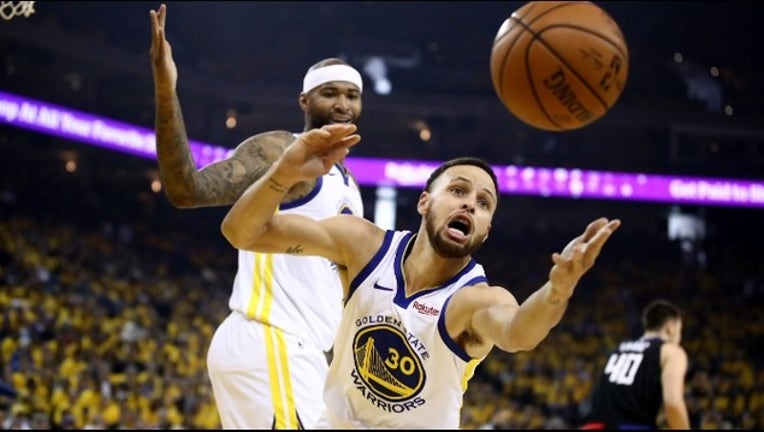 Stephen Curry goes for a loose ball during their game against the LA Clippers during Game One of the first round of the 2019 NBA Western Conference Playoffs at Oracle Arena on April 13, 2019 in Oakland, California. (Photo by Ezra Shaw/Getty Images)

OAKLAND, Calif. (AP) - Steve Kerr preached to the Golden State Warriors to not "take the bait."

The bait being Patrick Beverley.

Stephen Curry scored 38 points and made eight 3-pointers to give him the most in postseason history, and the top-seeded Golden State Warriors began their quest for a three-peat by running away from the frustrated Los Angeles Clippers for a 121-104 victory in their playoff opener Saturday on a night tempers flared.

Kevin Durant and Beverley were ejected with 4:41 to go, just 19 seconds after they received double-technicals when Durant stripped Beverley and the Clippers guard fell into the scorer's table. They both became enraged again and official Ed Malloy immediately sent them both to the locker room. Durant high-fived fans as he exited and the home crowd went into chants of "Beat L.A.!"

Durant said Beverley has a "different type of grit" coming from Chicago.

"You know what he's going to bring to the table, just the physicality, mucking up the game a little bit with his physicality, his talking, everything. That's what he brings to each team he plays on. That's his identity," Durant said. "For me, I know that coming into the series. I thought it was fun tonight."

"I got pushed, I got up and I got ejected. I guess the refs, I guess he saw something that I don't know," he said. "But that's all right. I give them a lot of credit."

Perhaps this old, heated rivalry still has all the testiness of years past - just with new faces all around.

Curry shot 8 for 12 from deep to pass Ray Allen (385) for career postseason 3s with 386, had a postseason career-high 15 rebounds, seven assists and the 31st 30-point postseason performance of his career.

"To be in the same category and to pass a guy like Ray Allen and all the iconic moments he's had in playoff games and finals games, it's pretty surreal," Curry said. "Definitely honored and grateful for those opportunities. I always joked, if I shoot a lot of 3s I better make a lot of them."

On one of his marvelous 3s, the two-time MVP knocked one down from way back late in the third, nearly did the splits in the air and landed on his back side - still smiling all the while.

These teams are meeting for just the second time in the postseason after the Clippers took a seven-game series in the first round in 2014 when the California franchises had a deep dislike for each other.

Game 2 is Monday night back at Oracle Arena.

Draymond Green got Golden State going by making all five of his shots in the first quarter on the way to 17 points to go with seven assists and seven rebounds, while Durant scored 23 points as the Warriors ran their postseason winning streak to seven games.

Beverley, who missed last Sunday's 131-104 loss at Oracle because of a right hip pointer and was booed during pregame introductions, didn't score in the first half and wound up with three points on 1-for-7 shooting, seven assists and seven rebounds.

He and Durant received double-technicals with 5 minutes left before they got into it again.

The Clippers lost their cool on a couple of occasions, and that hurt playing in an already difficult road arena.

Danilo Gallinari's technical in the final minute of the second only further fueled the home crowd, and Curry capitalized as the Warriors ran to a 69-56 halftime advantage.

"Curry has destroyed us all year," Rivers said.

Cousins, who played his first game of the season Jan. 18 at the Clippers, had nine rebounds and four assists.

Kerr challenged the Warriors - not to mention himself with a self-acknowledged temper - to be more disciplined yelling at the officials. Green was knocked down by Beverley on a no-call early and argued but avoided a technical.

"Fans need to understand, it wouldn't be possible to officiate the games the exact same way in the playoffs as the regular season. The games would take four hours," Kerr said.

The Clippers had their own costly moments arguing.

Williams and Rivers also were heated late in the first half about no fouls being called.

Rivers received a technical leaving the court at halftime and Klay Thompson shot a free throw before the third quarter began.

"All I want is consistency. That's what I got a tech for at halftime," Rivers said, noting Gallinari said nothing offensive to deserve a technical.

Clippers: The Clippers were 2 of 10 from deep in the first half, when they had only 13 assists. ... Los Angeles, which has lost four straight on the Warriors' home floor, was outrebounded 53-40.

Warriors: Curry notched his fifth career double-digit postseason rebounding game. ... Durant (3,679) passed Dirk Nowitzki (3,663) for 15th place on the career playoff scoring list. ... The Warriors have won seven straight postseason Game 1s and 14 of 15 openers in all - going 16-1 in their first game of a series dating to the 2014-15 season.