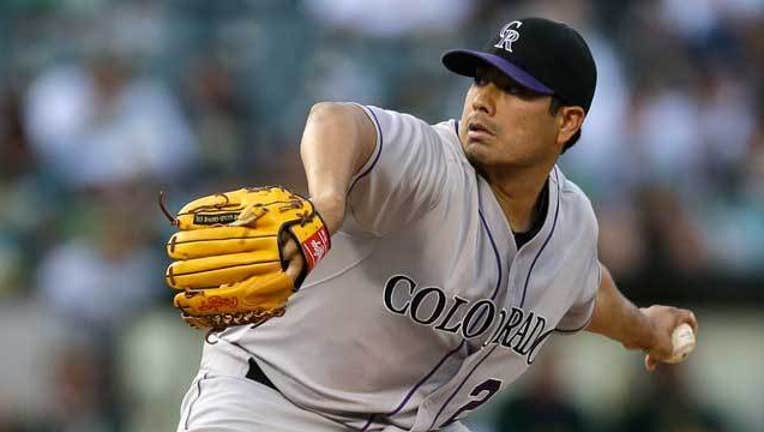 Charlie Blackmon singled to break a scoreless tie in the fifth. Nolan Arenado singled in the fourth to extend his major league-leading hitting streak to a career-high 17 games.

Troy Tulowitzki also singled and has hit in 14 straight for the Rockies, who snapped a three-game skid.

Colorado had been 0-7 in interleague games this season and had lost 14 straight in American League ballparks before De La Rosa and two relievers combined on a six-hitter.

The A's were without ace Sonny Gray, scratched from his scheduled start before the game because of illness.

De La Rosa (5-3) gave up four hits and struck out four with four walks in his first appearance against the A's since 2009. The left-hander needs one strikeout to reach 1,000 for his career.

LaTroy Hawkins pitched the ninth for his second save. Hawkins was needed to close after John Axford was placed on the family medical emergency list.

The Rockies needed a big effort on the mound after struggling early against Oakland replacement starter Chris Bassitt.

Called up from the minors before the game, Bassitt (0-1) retired his first 10 batters and didn't allow a baserunner until Tulowitzki flared a single to left that landed just in front of a charging Mark Canha.

Colorado broke through when Blackmon's two-out single in the fifth drove in Ben Paulsen.

Bassitt gave up five hits and one run in five innings. He struck out three and didn't walk a batter.

Wilin Rosario singled and scored on a wild pitch by Fernando Rodriguez in the seventh.

De La Rosa made it stand up after pitching out of a bases-loaded, one-out jam in the sixth. He also benefited from Colorado's defense, which turned two double plays.

Athletics: INF Max Muncy was optioned to Triple-A Nashville to make room for Bassitt on the roster. Muncy was batting .203 with two homers and six RBIs in 34 games with Oakland. ... RF Josh Reddick is "a little banged up," according to manager Bob Melvin, and was held out of the starting lineup. Reddick is expected to play Wednesday.

Rockies: RHP Chad Bettis (4-2) has won his past two starts and will be making his first career appearance against Oakland in the series finale Wednesday.