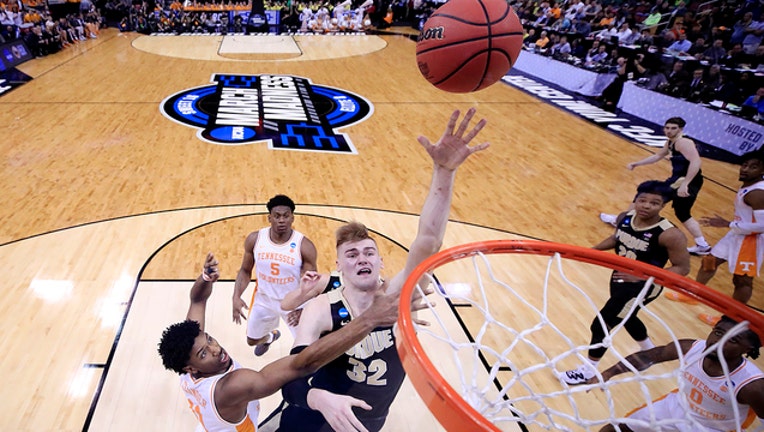 Matt Haarms #32 of the Purdue Boilermakers shoots against the Tennessee Volunteers in the 2019 NCAA Men's Basketball Tournament on March 28, 2019 in Louisville, Kentucky. (Photo by Kevin C. Cox/Getty Images)

NASHVILLE, Tenn. (AP) - Carsen Edwards scored 29 points as Purdue advanced to the Elite Eight of the NCAA Tournament for the first time since 2000, needing overtime to beat Tennessee 99-94 Thursday night after blowing an 18-point lead.

The third-seeded Boilermakers (26-9) will play either top-seeded Virginia or No. 12 seed Oregon on Saturday in the South Regional final for their first trip to the Final Four since 1980.

Purdue is in a regional final for the fifth time, but first with coach Matt Painter, who had gotten the team to the round of 16 four times previously.

The co-Big Ten champs needed a pair of free throws by Edwards with 1.7 seconds left in regulation to send the game to overtime after the star guard was fouled shooting a 3.

Grant Williams' dunk with 8.8 seconds left had Tennessee (31-6) on the verge of the Vols' second Elite Eight berth all-time. But Edwards then was fouled by Lamonte' Turner on a corner jumper. Purdue's all-time leading scorer in the NCAA Tournament missed his first attempt, but tied it at 82.

It was Tennessee's second straight overtime game in this tournament. The Vols blew a 25-point lead to Iowa in the second round, but recovered to win it in OT. The last team to blow consecutive overtime games in the NCAA Tournament was Florida in 2011. The Gators beat BYU and lost to Butler.

Ryan Cline finished with a career-high 27 points, shooting 7 for 10 from 3-point range, before fouling out in OT for Purdue. Haarms and Nojel Eastern each had 11.

This was the third straight Sweet 16 berth for the Boilermakers, and their experience at this point showed compared to a Tennessee team with nobody around from the Vols' last trip to a regional semifinal back in 2014. The Boilermakers led 40-28 at halftime as they outshot, outrebounded and outplayed Tennessee into only the fourth double-digit deficit this season for the Vols.

Tennessee: It's a disappointing end to an otherwise excellent season that saw the Vols win 19 straight games and sit atop The Associated Press' Top 25 poll for four straight weeks. The Vols also will lose at least a pair of starters from this squad with Schofield and Alexander both seniors.

Edwards now is the all-time leading scorer in Purdue history in the NCAA Tournament. He came in with 153 points, and he had 168 by halftime of his ninth career game to pass JaJuan Johnson, Brian Cardinal and Joe Barry Carroll (161). He has scored at least 25 points in his last four NCAA games.