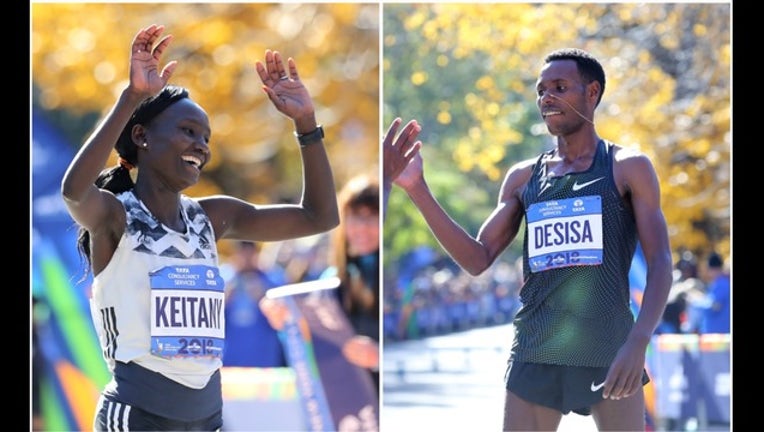 Mary Keitany of Ethiopia and Lelisa Desisa of Ethiopia have won the New York City Marathon,

NEW YORK (AP) - By the time Mary Keitany was pacing her way up Manhattan's First Avenue, she had no reason to look back for challengers. The Kenyan's lead was growing over the strong women's field with every stride, and all she thought about was the finish line.

Lelisa Desisa of Ethiopia didn't break out into a big grin until he pulled away from two opponents late in the race.

In perfect crisp autumn weather for distance runners, Keitany and Desisa won the New York City Marathon on Sunday in near record times.

Keitany, 36, became the second woman to win the marathon four times. She ran the race in 2 hours, 22 minutes, 48 seconds, the second fastest time for the course in history. Margaret Okayo of Kenya set the record of 2:22:31 in 2003.

"I can say the course record was not in my mind," Keitany said. "For me, winning was the most important."

"I'm pretty happy to finish on the podium," Kamworor said. "I came out the best that I could in the race. I tried my best, and I'm happy to be third."

Keitany won in 2014, 2015 and 2016 before coming in second last year to Shalane Flanagan, the first American woman in 40 years to win the New York City Marathon. She joined Grete Waitz, the Norwegian who won the marathon nine times between 1978-1988, as the only women to win the marathon four times.

She and Ethiopians Rahma Tusa and Gudeta turned their race to a three-woman field at the 15-mile mark. Keitany pulled away from Tusa and Gudeta at the 19-mile mark, leading Tusa by 26.58 seconds and Gudeta by 43.98 seconds. She extended her lead over Tusa to 1:27.83 at the 21-mile mark.

From that point, the question was not whether Keitany would win. Rather, it was by how much.

"You have to find motivation, things to focus on," Flanagan said. "When I finally got to third place, I got another level of excitement because I was fighting."

The United States had four women finish in the top 10: Molly Huddle was fourth, Desiree Linden was sixth and Allie Kieffer was seventh.

Daniel Romanchuk became the first American to win the men's wheelchair division, with a time of 1:36:21. Romanchuk finished 01.15 seconds ahead of Switzerland's Marcel Hug. David Weir of Britain, American Aaron Pike and Australian Kurt Fernley rounded out the top five.

"I need air and I'm in pain," said Romanchuk, a 20-year old from Champaign, Illinois, who won the Chicago Marathon last month. "It's wonderful to be able to win my two Abbott major marathons on American soil. It's an amazing experience."

Manuela Schar of Switzerland repeated as winner of the women's wheelchair division. Schar, who also won the Berlin and Chicago marathons, finished with a time of 1:50:27. American Tatyana McFadden finished second with a time of 1:50:48. Lihong Zou of China came in third. Eliza Ault-Connell of Australia and Margriet Van Den Broek of the Netherlands finished fourth and fifth.

"New York is always a really tough one for me because of the course," Schar said. "I'm not really a good climber so I always have to work really hard in the flat part. Yeah (I) tried to make that ground that I lose in the hills. I'm always a bit more nervous before New York than before the other races."