NCAA will permit athletes to be compensated for their names, images, likenesses, Board of Governors says

The National Collegiate Athletic Association will now permit athletes to be compensated for their names, images and likenesses, the NCAA Board of Governors said Tuesday.

WASHINGTON (AP) - The Supreme Court on Wednesday seemed ready to give college athletes a win in a dispute with the NCAA over rules limiting their education-related compensation.

With the March Madness basketball tournament in its final stages, the high court heard arguments in a case about how colleges can reward athletes who play Division I basketball and football. Under current NCAA rules, students cannot be paid, and the scholarship money colleges can offer is capped at the cost of attending the school. The NCAA defends its rules as necessary to preserve the amateur nature of college sports.

The outcome will help determine how college athletes are compensated and whether schools can offer tens of thousands of dollars in education benefits for things such as postgraduate scholarships, tutoring, study abroad opportunities and vocational school payments.

During an hour and a half of arguments conducted by phone because of the coronavirus pandemic, both liberal and conservative justices sounded sympathetic to students. 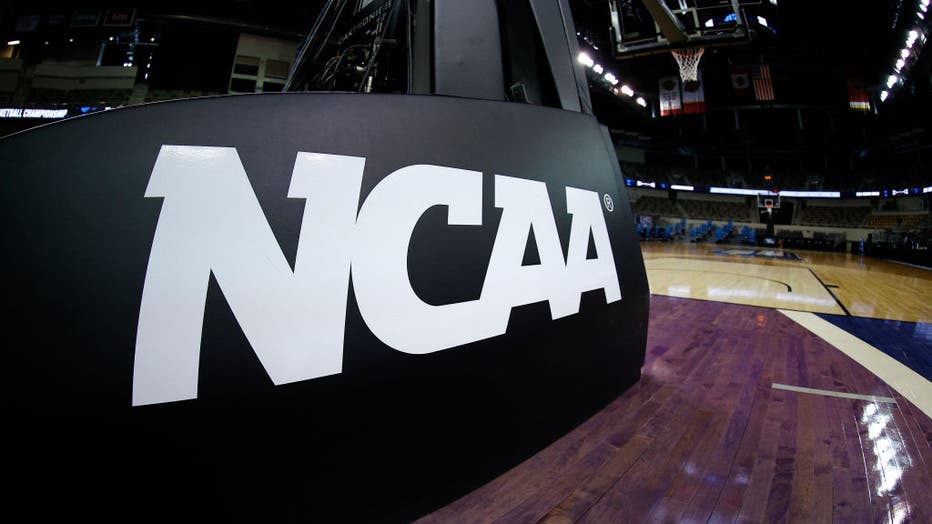 The NCAA logo is seen on the basket stanchion before the game between the Oral Roberts Golden Eagles and the Florida Gators in the second round game of the 2021 NCAA Men's Basketball Tournament at Indiana Farmers Coliseum on March 21, 2021 in Indiana

Whatever happens at the high court, how college athletes are compensated is already likely changing. The NCAA is in the process of trying to amend its longstanding rules to allow athletes to profit from their names, images and likenesses. That would allow athletes to earn money for things like sponsorship deals, online endorsement and personal appearances. For the top athletes, those amounts could dwarf any education-related benefits.

The former college athletes have some big-time supporters. The players associations of the NFL, NBA and WNBA are all urging the justices to side with the former athletes, as is the Biden administration.

The justices are hearing arguments by phone in the case as they have been doing for almost a year because of the coronavirus pandemic. They will almost certainly issue a decision in the case before they leave for their summer break at the end of June.

The NCAA wasn’t happy with the outcome the last time its rules were before the Supreme Court. In 1984, the high court rejected NCAA rules restricting the broadcast of college football. The justices’ ruling transformed college sports, helping it become the multibillion-dollar business it is today.