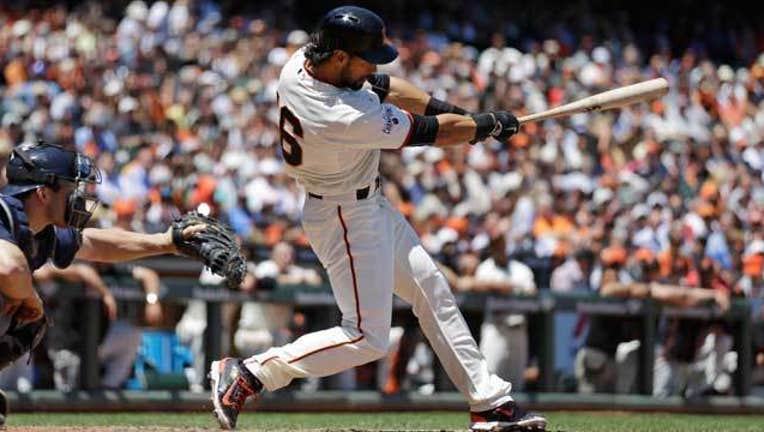 Casey McGehee added a two-run double and Angel Pagan hit an RBI single as the Giants snapped their longest home skid since an 11-gamer at New York's Polo Grounds in 1940. Tim Lincecum (7-3) allowed two runs and five hits in 5 2/3 innings to get the win in his second start against his hometown team.

Brad Miller homered and drove in two runs for the Mariners, who split the two-game series in San Francisco and finished 4-4 on an eight-game road trip.

The Giants avoided their first winless homestand of at least five games since the first one ever at AT&T Park in 2000. They did it by getting some rare offense at home.

San Francisco had scored just 17 runs during the home skid and had not homered in five straight games here before Duffy went deep in the second inning against J.A. Happ (3-3).

Lincecum, who has won five of six decisions at home, failed to make it out of the sixth inning. He allowed a solo homer in the fifth to Miller and then an RBI single to Miller in the sixth that cut the lead to 3-2.

George Kontos entered with two outs and runners on first and third and got Mike Zunino to fly out. Kontos has not allowed any of the 16 runners he has inherited this season to score.

Pagan was ejected in the eighth inning after arguing with home plate umpire John Hirschbeck. The Giants still ended up with some insurance runs when Tom Wilhelmsen walked two batters before Duffy hit an RBI single and McGehee broke it open with a pinch-hit, two-run double.

Mariners: LF Mark Trumbo did not start for a third straight game because of back spasms. He grounded out as a pinch-hitter in the seventh inning and could be back in the starting lineup by Wednesday. ... 3B coach Rich Donnelly returned after missing Monday's game with a stomach ailment.

Giants: OF Hunter Pence will wear a splint on his injured left wrist for the next five to seven days and will not swing a bat. ... OF Gregor Blanco was scheduled to run sprints and take part in baseball activity as he recovers from a concussion. He is expected to be able to play again in a day or two. ... 3B coach Roberto Kelly left the team because of the death of his mother-in-law. Assistant hitting coach Steve Decker took over his duties.

Mariners: The four-game matchup shifts to Seattle for the final two games starting with a marquee pitching duel between Seattle's Felix Hernandez (9-3) and Madison Bumgarner (7-3). Hernandez allowed eight runs while retiring only one batter last Friday against Houston, matching the shortest start of his career.

Giants: Bumgarner makes his first appearance against an AL team since his five-inning save in Game 7 of the World Series last year against Kansas City that earned him Series MVP honors. Bumgarner allowed one run in eight innings of a no-decision in his only appearance against the Mariners.