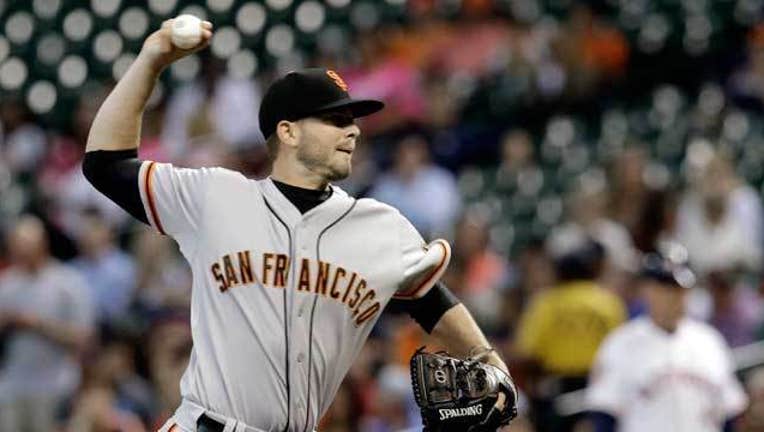 HOUSTON (AP) — Chris Heston's first career complete game was a two-hitter and he struck out 10 as the San Francisco Giants won for the third time in four games with an 8-1 victory over the Houston Astros on Tuesday night.

Matt Duffy had three hits and drove in five runs for the Giants. It was the most RBIs by a Giants rookie since Buster Posey had six July 7, 2010, at Milwaukee.

Heston (3-3), a rookie right-hander who retired the last 22 batters, has allowed two runs or fewer in five of his seven starts this season.

Duffy, had a 3-run double in the second inning and added a 2-run single as part of a 5-run fifth. Angel Pagan had three hits for San Francisco, which had a season-high with the eight runs.

Jason Castro homered in the second inning for Houston.

The Giants made it 5-1 after loading the bases in the fifth. After Brandon Belt struck out for the second out, Jason Maxwell had an infield single to shortstop Marwin Gonzalez, whose throw to second was errant, allowing Joe Panik and Pagan to score.

Brandon Crawford followed Maxwell with an RBI double to center before Duffy's single made it 8-1.

Collin McHugh (4-1) lost for the first time since August 2014. He allowed seven runs — three earned — and seven hits in 4 2-3 innings. The loss snapped McHugh's streak of 11 straight decisions with a win.

Giants: OF Hunter Pence (left forearm) continued an injury rehab assignment Tuesday at Triple-A Sacramento. Pence is 1 for 8 with an RBI and two runs scored in three games.

Astros: OF George Springer began an injury rehab assignment Tuesday for Double-A Corpus Christi against San Antonio. Springer is on the 7-day concussion DL backdated to May 6. . RHP Luke Gregerson was activated from the Family Medical Emergency List Tuesday.

Giants: RHP Tim Hudson (1-3) is looking to rebound after allowing six runs and a career-high 15 hits over 6 1-3 innings in a 7-2 loss to Miami on Thursday. Hudson is 5-0 with a 1.24 ERA in seven career starts against the Astros.

Astros: LHP Brett Oberholtzer will come off the DL and make his first start of the season in the finale of the two-game series. Oberholtzer, who has been on the DL with a left index finger blister suffered at the end of spring training, was 1-1 with 11 strikeouts and allowed seven runs in two rehab assignments with Triple-A Fresno.