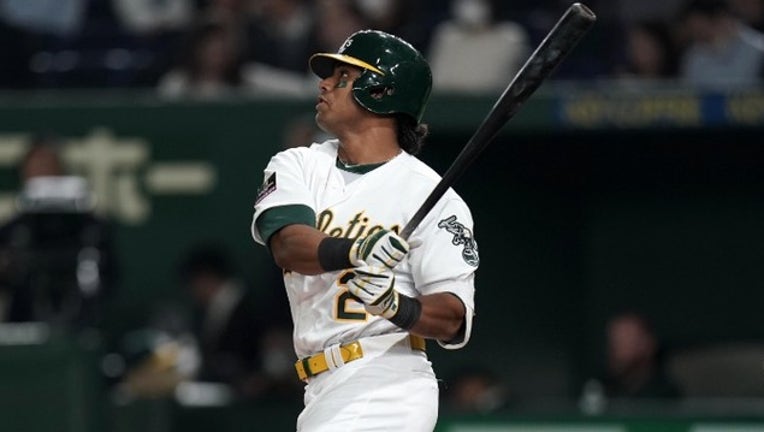 The Oakland A's signed slugger Khris Davis to a deal worth $33.75 million that keeps him with the club through 2021. (Photo by Masterpress/Getty Images)

OAKLAND, Calif. (AP) - Khris Davis is hardly comfortable with the kind of attention and fanfare the Athletics pulled out Friday to honor him for opting to stay in Oakland.

So it was quite a scene when the understated slugger raised his arms high as teammates and A's employees cheered and clapped when he entered the room.

"Yeah, it feels amazing, it's incredible, they're going to make fun of me all day for this," Davis said with a smile Friday, a day after the announcement of his deal adding $33.75 million that runs through 2021.

Davis got his big day - at last. He was patient for months, stayed focused on clearing the fences instead of cashing checks, all while showing Oakland's front office it needed to get a new deal done to keep the majors' reigning home run leader around for the foreseeable future.

"I don't seek attention, I guess, I'm not an attention seeker," Davis said.

His 10 home runs entering Friday's game against Toronto was tied for most in baseball.

The 31-year-old designated hitter said he chose Oakland over free agency because of his surroundings and his comfort with the blue-collar A's.

"You take stock of the players and realize how important this is here. For a guy that doesn't say much publicly, if you see our postgame celebrations and talk about leadership he's usually right in the middle of all of those," manager Bob Melvin said. "There's a time that he does speak, and his teammates know that, and he's a huge part of this team. Exciting day for all of us."

Davis didn't mind a little wait. What he cares about most is turning the A's into a perennial contender, something he helped do when the club made the playoffs last season for the first time in four years.

"There's just a drive that I want to be a part of," he said. "I think we could get to the playoffs again and again, like no doubt in my mind."

Davis is guaranteed $50.25 million over the next three years.

With a new ballpark in the works, general manager David Forst hopes this is a step toward keeping more of the core young talent together. Keeping Davis had been a top priority, and the sides discussed it for months.

Oakland has seen so many big stars and fan favorites leave over the past decade - in trades or free agency.

"I haven't done a lot of these," Forst said. "It's not a secret that a lot of players have left. We have to go back to Eric Chavez basically for players that we've been able to keep into free agency. This is special. I think we picked a special guy to do it with."

Also in attendance for the festivities at the ballpark was 11-year-old Anthony Slocumb, a Make-A-Wish Foundation participant who last season signed Davis' jersey that the slugger wore when he hit a 438-foot home run against Texas . Slocumb called it a highlight "in life and in school."

"It was really motivating. I think it was motivating for him, too," Slocumb said.

Slocumb loved being part of another memorable event Friday.

"It's really cool, it's really exciting, kind of nerve-wracking actually because there's a lot of really famous people in here. It's really neat," the Oakland sixth-grader said.

With his No. 2 jersey in a frame, two 'Rooted in Oakland" banners and green T-shirts reading "KD2 Rooted in Oakland" - they will be sold to benefit the Make-A-Wish Foundation - Davis appreciated all the support, including his teammates all around him.

They are the reason he wants to stick around.

"Just knowing who I'm going to see at the ballpark every day," Davis said. "Just seeing those guys every day on a consistent basis takes a lot of pressure off me."