Sections of fans appear to boo moment of unity at Chiefs, Texans game

There was a mixed response from the crowd at Arrowhead Stadium on September 10, when players from the Kansas City Chiefs and Houston Texans linked arms during a moment of silence for racial unity. (Credit: Ryan Sweets Matzelle via Storyful)

NFL fans who were able to attend the opening game between the Kansas City Chiefs and Houston Texans to start the 2020 season on Thursday appeared to boo the teams’ moment of unity at midfield prior to the coin toss.

Both teams lined up in the middle of the field after the national anthem and locked arms briefly before shaking hands to get ready for the coin toss. Fans on social media noticed that the limited number of fans who were in attendance appeared to let their own voices be heard during the moment.

Those watching through the prism of social media were apparently bewildered by the reaction. 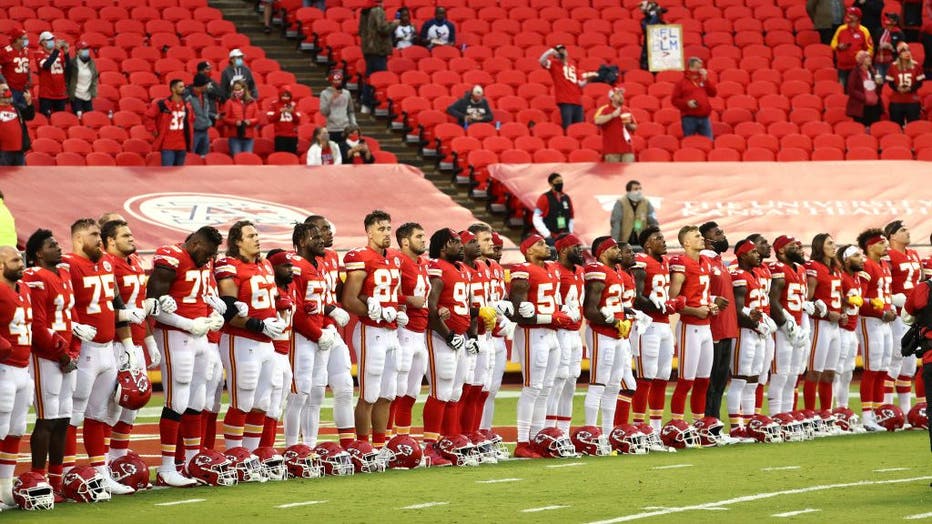 KANSAS CITY, MISSOURI - SEPTEMBER 10: Members of the Kansas City Chiefs stand united for with locked arms before the start of a gam against the Houston Texans at Arrowhead Stadium on September 10, 2020 in Kansas City, Missouri. (Photo by Jamie Squire

Texans players were not on the field for either “The Star-Spangled Banner” or the Black national anthem.

RELATED: Houston Texans remain in locker room during national anthem, Miami Dolphins say they plan to do the same

"Lift Every Voice and Sing" will be played before each game during the first week of the season as part of the NFL's efforts on social justice issues Chiefs players locked arm-in-arm in the end zone as the song played. The team went into the locker room after the rendition was over.