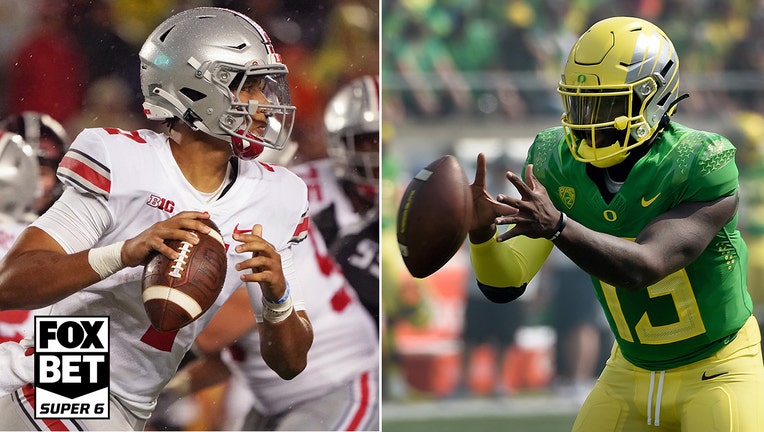 Normally, this is a matchup reserved for a brilliant New Year’s Day twilight in Pasadena, not the warmth of a late summer afternoon in Columbus.

Oregon and Ohio State have not played at a home site since 1987 in Columbus. They have only gone to Eugene once in the entire nine-game history of the series. But the two have been dominant figures in the Pac-12 and Big Ten for more than a decade. And on Saturday, when they kick off for FOX’s "Big Noon" Saturday showcase, it is easy to project both of them being in the College Football Playoff conversation.

Both won their openers last week. Ohio State topped Minnesota 45-31 behind C.J. Stroud’s four touchdown passes. Oregon had a bit of a dogfight in Eugene but escaped with a 31-24 win over Fresno State.

And you could win some big cash to start the weekend with FOX Bet Super 6. Just answer all six questions about how the game will unfold correctly, and you could take home $10,000. It’s fast, and it’s free, and all it takes is downloading the FOX Super 6 app on your phone or mobile device.

Here are the six questions and a little scouting report before Saturday's game.

It took a little while for Stroud and the Buckeyes to get going last week, scoring only 10 in the first half as the quarterback struggled on a drizzly night in Minneapolis. However, it probably won’t be the same on Saturday, as the Buckeyes could have their way against a Ducks pass defense that looked vulnerable against the Bulldogs last week. Oh, and Oregon did put 14 up in the first quarter last week thanks to CJ Verdell’s running game.

Which team will score the most points at the half and how many will it have?
The options: Oregon, Ohio State, Tie and with different point ranges

The team that has the more offensive firepower is Ohio State, and the second half of last week showed that. The question you have to wrestle with is simple: Is Oregon’s defense on the same level that Minnesota? If the answer is no – and honestly, on a kickoff that would be at 9 a.m. PT almost 2,000 miles away from home, it’s easy to see that – then, Ohio State is the play.

Who will have the most rushing yards and how many will they have?
The options: Oregon, Ohio State, Tie with a scale of 0-276+ rushing yards

Verdel is a great running back for the Ducks, and their attack is deep, rushing for 186 last week against Fresno. The only issue here? Ohio State has Miyan Williams (nine carries, 125 yards, touchdown) and three others that could pop a big gain like Master Teague.

Who will have the most passing yards and how many will they have?
The options: Oregon, Ohio State, Tie with a scale of 0-326+ offense yards

Stroud got a lot of attention, but a lot of credit should go to Chris Olave, who had four catches for 117 yards and two touchdowns last week. When Olave got active, the game totally swung. For Oregon to have a chance, Anthony Brown is going to need a really big day.

Who will have the most total yards and how many will they have?
The options: Oregon, Ohio State, Tie with a scale of 0-501+ offense yards

Again, Ohio State has a deeper attack. There are just more weapons at play and they physically just wear teams down. It probably will be the same way on Saturday.

Which team will win and by how many points?
The options: Oregon or Ohio State with ranges of 1 to 21+ points

This is a marquee matchup where one conference (the Pac-12) needs it more on the national landscape. Unfortunately, it won’t get it. The Buckeyes are the better team. And in Columbus, that’s a really tough ask for the Ducks.