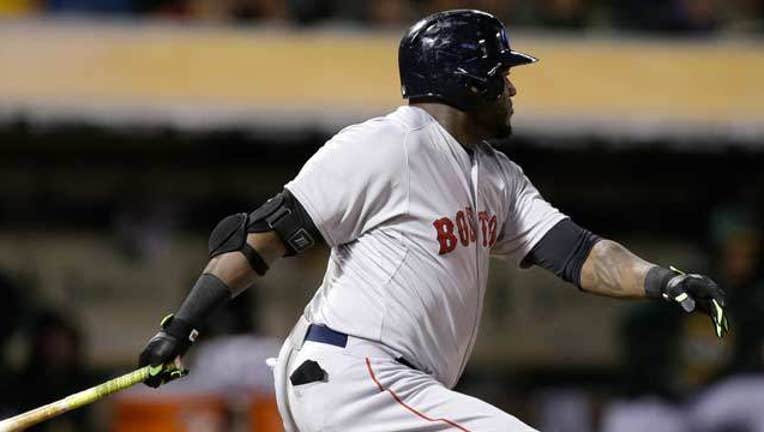 OAKLAND, Calif. (AP) — Pablo Sandoval received his latest World Series ring from the San Francisco Giants one night, then hit a game-winning home run the next in his anticipated return to the Bay Area.

Sandoval homered leading off the 11th inning back in Northern California where he won three championships for the Giants, and the Boston Red Sox beat the Oakland Athletics 5-4 on Monday night.

"It's exciting and emotional getting the ring and hitting the homer to win the game," Sandoval said. "It was a big day for me."

Sandoval just cleared the fence in right on an 0-2 pitch from Angel Castro (0-1) for his fourth homer of the year and second in two days, helping Boston win consecutive games for the first time since April 20-21.

Matt Barnes (1-0) pitched two innings for his first major league win. He allowed Mark Canha's leadoff walk in the bottom of the 10th before recovering.

Oakland lost its sixth straight and fell to a majors-worst 0-6 in extra innings this season. The A's are 1-11 in one-run games and four of their last five losses are by one run and seven of the past nine.

"You really have to persevere to keep your fight the way things have been going in these type of games for us," A's manager Bob Melvin said. "It's the same story here. It's getting tough to explain. It seems like we've played this game so many times this year that it's a little bit surreal. But we have to come out tomorrow and try to break through."

Sandoval's longball was his only hit in five at-bats. He grounded into an inning-ending double play in the second with many in the crowd of 19,743 booing him.

He spent his first seven seasons with San Francisco before signing a $95 million, five-year deal with Boston in November. Sandoval received his latest World Series ring from Giants manager Bruce Bochy on Sunday night at the Red Sox team hotel.

"Today was a special day for him," manager John Farrell said.

Stephen Vogt tied the back-and-forth game at four with a sacrifice fly in the seventh against Craig Breslow, but no lead was safe in a game that took 3 hours, 57 minutes and featured 13 pitchers.

Mookie Betts hit a tying single in the seventh as Boston got three straight base hits against Evan Scribner and the Red Sox went ahead on Dustin Pedroia's forceout. Melvin then went to Fernando Abad to face David Ortiz, who hit a sharp liner to first that Max Muncy stopped with a diving catch.

The Red Sox had lost seven of 10 after concluding a 22-game stretch against the AL East on Sunday.

Scott Kazmir didn't allow a hit until Ortiz's RBI single in the fourth.

Kazmir then picked off Ortiz at second after his leadoff double in the sixth, and the Red Sox challenged the call. It was upheld in 1 minute, 43 seconds.

The A's had 13 hits on a day Hall of Famer Rickey Henderson arrived at the Coliseum ready to talk to the A's and see how he might help get them going.

Oakland's Ike Davis left in the bottom of the fourth with a strained left quadriceps muscle.

Reliever Edward Mujica made his A's debut in the eighth against his former club two days after Boston traded him away and pitched a perfect inning.

A's reliever Scribner allowed two runs in his first 15 outings this season before yielding two Friday at Seattle to have his 10-game scoreless streak snapped. He gave up two more Monday.

Red Sox: RF Shane Victorino returned from the disabled list to start in right field and bat seventh. He had been sidelined since April 25, retroactive to April 23, with a strained right hamstring that he injured April 22 against the Tampa Bay Rays.

Athletics: OF Ben Zobrist, recovering from left knee surgery, hit soft toss in the cate and could take live batting practice as soon as Tuesday. ... Eric O'Flaherty (shoulder) and RHP A.J. Griffin (Tommy John elbow surgery) were set to be examined by a team doctor and the hope is they will play catch in a couple of days. ... LHP Sean Doolittle, who hasn't pitched all season because of a shoulder injury, faced batters for the second time after first doing so Friday. He was encouraged and the next step will be pitching in a rehab game, though where was still being determined.

Athletics: LHP Drew Pomeranz (1-3) is 0-3 over his last five starts heading into his seventh outing of the year.