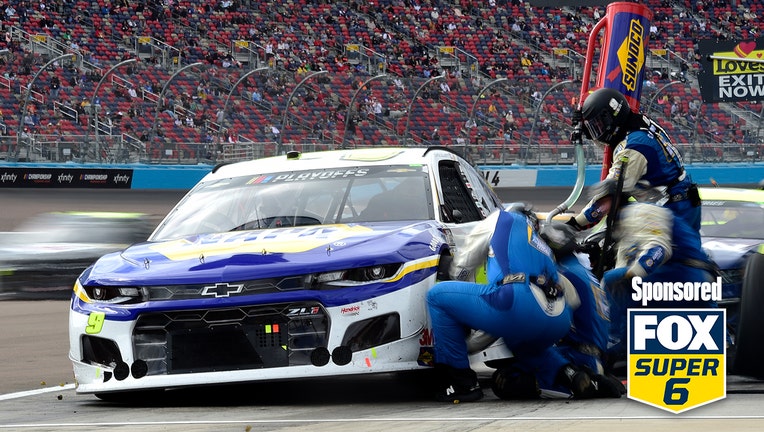 If you are looking for a little chaos this weekend, Phoenix might be the spot for you.

The NASCAR Cup Series heads into its fifth race of the year Sunday, with the Instacart 500 at Phoenix Motor Speedway (3:30 p.m., FOX), and a season with four different winners already will probably get a little wilder.

You could make some money off the action as well. All you have to do is pick the right answers to six questions about Stage 2 of the race, and you could win the jackpot of $10,000 of Clint Bowyer’s money, thanks to FOX Super 6.

It’s absolutely free to play! Just download the FOX Super 6 app on your phone or mobile device, and answer the six questions. That’s all you need to do for your chance at $10,000 of Clint's money.

Looking for a little insight on how to get there? Here are the six questions in play for this week’s race, along with some thoughts you might want to keep in mind for each:

Of the four winners this season, who will have the best finish in Stage 2?

Larson is the fashionable pick after winning last week in Las Vegas. He has also been pretty good at Phoenix historically, with seven top-10s and five top-5s in 13 starts overall. His car has been wickedly fast of late, too, with three top-10s in four starts this season.

One other note: Larson and Byron are the only two of these four to win a stage so far this year.

Hamlin has been a good bet in this type of event. He has three stage wins through four races while leading the Cup standings early.

Larson might be the second-best option on this list due to the way his car runs at Phoenix.

Which winless driver this season will have the best finish in Stage 2?

Again, Hamlin has been so good early this season, and it feels like he’s due. He has raced well at Phoenix, with two wins and 18 top-10s in 31 races at the track in his career. It almost looks too easy for him right now.

Hamlin has three stage wins for Toyota this season. Chevy cars have won three as well, and Ford (two) lags behind.

If you like Larson to be the best guy in Stage 2, he's a Chevy guy.

Where will previous race winner Kyle Larson finish in Stage 2?

First or second, third or fourth, fifth or sixth, seventh or eighth, ninth or 10th, or outside the top 10

Again, it is so easy to pick Larson high with the way he’s racing and his past success at Phoenix.

Racing is a really fickle event, sure. Still, anything from first to sixth on this list looks like an appropriate selection.

Will three Chevys, three Fords and three Toyotas all finish in the top 10 of Stage 2?

On paper, that looks extremely possible and maybe even likely to happen if you bunch up guys working together on the track. Realistically, though, too many events could take place to think it will happen that way.

Play Clint Bowyer's NASCAR Stage 2 Super 6 contest for free, and you could win $10,000! Just download the FOX Super 6 app, and make your picks now for your chance to win!