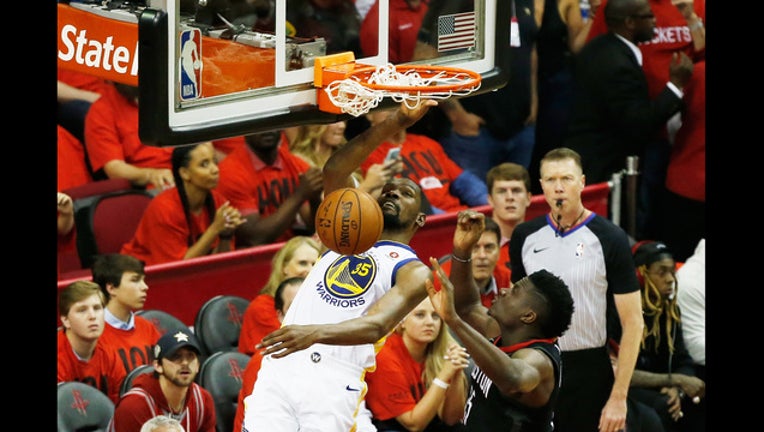 Kevin Durant of the Golden State Warriors dunks against Clint Capela of the Houston Rockets in Game Two of the Western Conference Finals of the 2018 NBA Playoffs at Toyota Center on May 16, 2018 in Houston, Texas. (Photo by Tim Warner/Getty Images)

HOUSTON (AP) - James Harden and Eric Gordon each scored 27 points to lead a balanced attack and the Houston Rockets routed the Golden State Warriors 127-105 on Wednesday night to even the Western Conference finals at one game apiece.

The Rockets didn't trail after the first quarter and led by double digits for most of the night. They head to Oakland, California for Game 3 on Sunday night feeling much better after rebounding from a deflating 119-106 loss in the series opener.

"We can beat anybody, anywhere at any time playing the way we play," coach Mike D'Antoni said.

P.J. Tucker added a playoff career-high 22 and Trevor Ariza had 19 as both bounced back after struggling in Game 1. Tucker had just one point in that game and Ariza scored eight, but was limited on defense after collecting his fifth foul early in the third quarter.

Kevin Durant had 38 points after scoring 37 in the opener, but Stephen Curry and Klay Thompson combined for just 24 points after the pair went for 46 in Game 1.

Houston wasn't able to slow down Durant, but did a much better job of limiting open 3-pointers by Thompson and Curry, and the two made just 3 of 12 attempts.

"They were desperate tonight and played like it, and we weren't and it showed," Golden State coach Steve Kerr said.

The Warriors made three free throws to get within 11 early in the fourth quarter before the Rockets scored the next 11 points, with 3s from Gordon, Tucker and Harden to make it 111-89 with about 6 1/2 minutes to play.

Durant made a basket after that, but Houston scored the next eight points to extend the lead to 119-91 with about five minutes left.

The Warriors got frustrated in that stretch, with Durant getting a technical for shoving Harden in the back and Draymond Green pushing Ariza out of bounds seconds later. It was then that Kerr sent all of his starters to the bench for good.

Gordon came off the bench to make six 3-pointers, Tucker tied a playoff best with five and Harden added three.

"We got outplayed the whole game ... we got it handed to us," Kerr said. "You can look at it any way you want ... and parcel it out, but it didn't matter who we had out there tonight we got beat."

Houston led by as many as 19 in the first half and was up 64-50 at halftime. The Warriors cut it to 74-64 with five quick points from Durant, but the Rockets opened it back up to 89-72 when Gordon made an off-balance layup before crashing to the court while being fouled and made the free throw.

The Rockets were up by 16 to start the fourth quarter but Golden State got within 98-86 with about 10 minutes left. Curry had five points in that span, including his first 3 after missing his first six attempts of the night.

Curry finished with 16 points and Thompson was 3 for 11 for his eight points.

Rockets: Houston improved to 8-0 this postseason when leading after three quarters. ... Houston made 16 of 42 3-point attempts. ... Paul finished with 16 points.

After Game 3, the teams will play Game 4 on Tuesday night in Oakland before returning to Houston for Game 5 on Thursday.