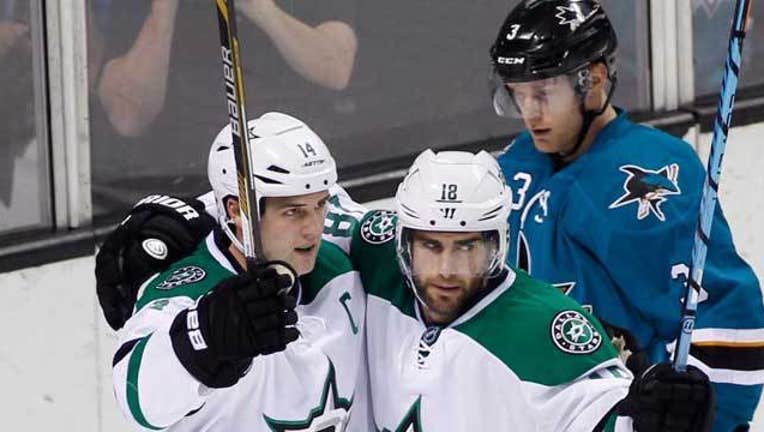 SAN JOSE, Calif. (KTVU-AP) — Jamie Benn scored twice, Colton Sceviour scored in the first 30 seconds, and the Dallas Stars beat the San Jose Sharks 5-1 on a Monday night when both teams were eliminated from the playoff picture.

Patrick Eaves and Ryan Garbutt also scored for the Stars, who have won seven of their last eight road games and seven of 10 overall.

Joe Thornton scored for the Sharks, 5-9-2 in their past 13 home games. They failed to make the playoffs for the first time since 2002-03.

Jhonas Enroth stopped 23 of 24 shots to improve to 3-0 in four career appearances against the Sharks. Alex Stalock made 20 saves.

Sceviour, alone on the left side, scored when a rebound bounced straight to his stick off Stalock's pads.

Eaves connected a power-play late in the first period to make it 2-0. Shawn Horcoff's shot stayed in front of the net and Benn kept poking at it until Eaves found an opening.

Benn, who has 21 career multi-goal games, added a power-play goal midway through the second period.

Thornton scored on a breakaway six minutes later. But Benn added his second goal with just under five minutes remaining. He has 16 points in his last 10 games.

NOTES: Stars C Jason Spezza had his third multiple-point game in his last nine after failing to do so in the previous 11. . Dallas C Tyler Seguin extended his points streak to five games and nine of 10 overall. . Thornton scored a goal in back-to-back games for the first time since last Nov. 11-13. . Stars D Jason Demers, a former Shark, was credited with his 99th career assist. . Sharks C Joe Pavelski was selected the team's MVP and C Melker Karlsson was voted Rookie of the Year.