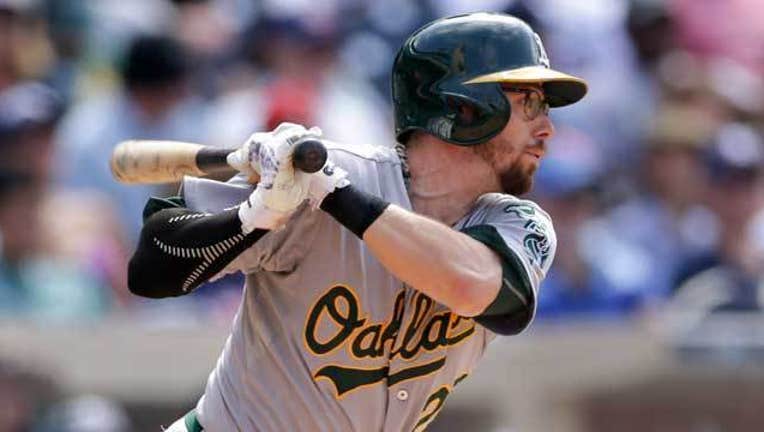 Sogard drove in the go-ahead in the ninth inning with a single off closer Craig Kimbrel, leading the A's to a 6-5 victory over San Diego on Tuesday and spoiling Murphy's major league debut.

''It's kind of neat for me to hand him his first loss,'' Sogard said with a broad smile. ''A little bittersweet for him.''

But Sogard, who played for Murphy at Arizona State, gave his former coach a lot of credit.

''I'm excited for Murph and his opportunity,'' Sogard said. ''He helped me tremendously to get where I'm at today.''

''A kid that I've known for a lot of years,'' Murphy said about Sogard. ''That stings a little bit to be honest with you.''

Kimbrel (1-2) issued a two-out walk to Billy Burns, who stole second and scored on Sogard's ground ball single to center.

''I thought our guys went out there and played great today and played with great energy and a great comeback in eight innings,'' Kimbrel said. ''I just didn't go out and do my job.''

The game was played on the one-year anniversary of the death of longtime Padre and Hall of Famer Tony Gwynn. The Padres played a brief video tribute to the eight-time NL batting champion before the game.

Burns not only scored the winning run but also had a two-run triple and robbed Justin Upton of a two-run homer in the first.

''He's had a knack for doing that recently,'' A's manager Bob Melvin said. ''He just keeps getting better and better.''

San Diego's Matt Kemp hit a solo homer in the eighth off Evan Scribner (2-1) to tie the game at 5-all. It was Kemp's third home run of the season.

Tyler Clippard pitched the ninth for his 10th save in 12 chances.

Ben Zobrist hit a two-run homer off Andrew Cashner to give the A's a 5-3 lead in the sixth inning.

Cashner had not allowed a hit until a one-out double in the fifth by Max Muncy. After a two-out walk, Oakland starter Scott Kazmir singled sharply down the third-base line for one run. Burns followed with a two-run triple, tying the score at 3-all.

Kazmir cost his club a run in the fifth after Melvin Upton Jr. took off from third base with two outs when the left-hander started his windup. Kazmir stopped midway through his delivery to make a throw home and was called for a balk by home plate umpire Tripp Gibson.

The Gwynn tribute video began to play while players from both teams were still stretching and running a few minutes before the game in the outfield. Both teams stopped what they were doing to watch the video.

A's: 1B Ike Davis (strained left calf) is expected to come off the 15-day DL on Wednesday. ... RHP Edward Mujica (fractured right thumb) is projected to make one more minor-league rehab appearance before being activated.

Padres: RHP Brandon Morrow (right shoulder inflammation) is still about a week away from picking up a baseball.

A's: RHP Jessie Chavez (2-6, 2.64 ERA), who has the lowest run support (1.76) in the majors, starts against San Diego for the first time after six relief appearances.