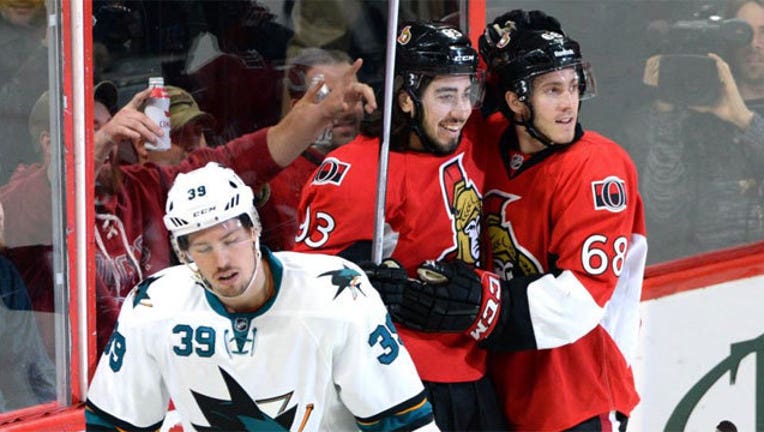 OTTOWA, Ontario (KTVU-AP) -- Mika Zibanejad scored twice, and the Ottowa Senators held off the San Jose Sharks for a 5-2 win on Monday night. The Senators (37-24-11) earned their seventh straight win and jumped one point ahead of the Boston Bruins for the second wild-card spot in the East with a game in hand.

Ottawa is above the postseason cutoff for the first time since late November.

Ottawa's run has been impressive, as the Senators are 17-2-2 in their past 21 games. They trailed the Bruins by 14 points in early February.

''We've been chasing it, and that's been our goal to get inside the eight, so it's real enjoyable,'' Ottawa coach Dave Cameron said. ''Wins are always nice, and they're really nice in this case because we're in the top eight with a day off (Tuesday).

''It's time to sit back and regroup and actually enjoy it for a day.''

Joe Pavelski and Chris Tierney scored for the Sharks.Antti Niemi made 32 saves.

The Senators scored four unanswered goals in the third period - two within a span of 1:12.

Zibanejad tied it 2-2 with his second goal of the game at 2:19 of the third. Zibanejad took a pass from Bobby Ryan and roofed a shot over Niemi.

After being stonewalled on numerous occasions, Chiasson solved Niemi at 12:11 of the third when he deflected in Mark Stone's shot. Pageau made it 4-2 at 13:23 after he and Erik Karlsson worked a give-and-go.

Hoffman finished the scoring with 1:23 left when he scored his 26th goal of the season.

''The rush was certainly something that caused us a lot of headaches,'' Sharks coach Todd McLellan said. ''They were quick. Whether it was turnovers or we were outnumbered, we fell on one, but three of their four goals came off of it.

The Senators received a scare in the third period when Hammond was slow getting up after a collision with San Jose's Logan Couture. Zibanejad left the game after being hit by a slap shot by Hoffman, but Cameron said he expects both will play on Thursday at home against the NHL-leading New York Rangers.

Two quick goals allowed the Sharks, who were playing their third of six road games, to jump out to a 2-1 lead after two periods.

Pavelski tied it 1-1 with a power-play goal at 12:47 as he jumped on a rebound. Just 30 seconds later, Tierney gave San Jose the lead when he took a pass from Tommy Wingels and beat Hammond glove side.

Despite giving up the two quick goals, the Senators never panicked.

''There was a quick one that could have been prevented, it was a little bit of a breakdown, but that happens,'' Ryan said. ''Not much needed to be said. This team has a lot of confidence in itself in these games.''

Ottawa took a 1-0 lead with 5:51 left in the first period on Zibanejad's 18th goal. Hoffman shot a floater at the net that deflected in off Zibanejad's knee.