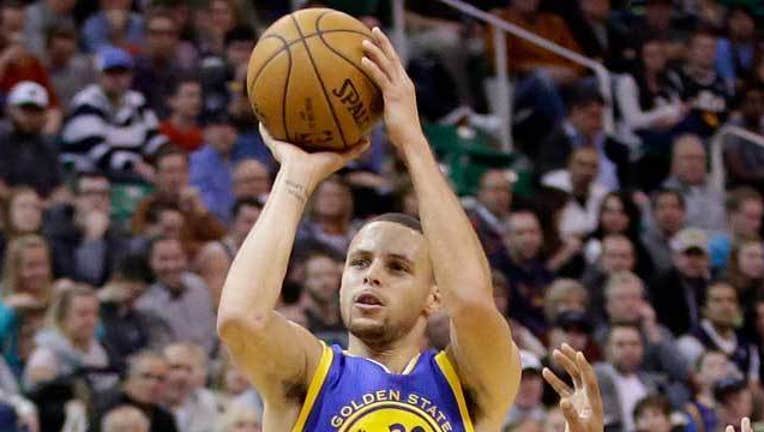 OAKLAND, Calif. (AP) — The media crush that descended upon the Golden State Warriors' practice facility Saturday forced Stephen Curry to shoot on the far court, where a billboard that honors the 1974-75 championship team hangs on the wall.

As if Curry and the Warriors needed a reminder, the giant yellow sign served as a symbolic notice: Never has another title been so close.

Two wins from ending the franchise's 40-year championship drought, the Warriors are looking increasingly comfortable in front of all the cameras. They head into Sunday night's Game 5 of the knotted-up NBA Finals against the Cleveland Cavaliers confident that they have found the formula to win.

"You can't necessarily say you've gotten over the hurdle until you win the series, but I think we've adjusted to it and we're ready for it now," Warriors forward Draymond Green said. "We're ready to take that jump."

Golden State has gotten better every time it has been tested.

Dropping Games 2 and 3 to the Cavs was the sixth time the Warriors lost two straight this season. The previous five times they rolled off winning streaks of 16, eight, three, nine and six in a row, the latter coming after falling behind 2-1 to the Memphis Grizzlies in the second round.

"They get a little angry when they lose a couple in a row and they've responded all season long," Warriors coach Steve Kerr said. "Hopefully we can get on a nice little run here, too."

Whether it's making adjustments, learning opponents or rediscovering rhythm, the Warriors have worn down teams as each series has progressed.

Kerr's decision to play small — suggested by 28-year-old assistant Nick U'Ren — made a big difference in Golden State's 103-82 win at Cleveland on Thursday night. Kerr likely will stick with the lineup full of 3-point shooters — starting swingman Andre Iguodala instead of Andrew Bogut and sliding the 6-foot-7 Green to center — that spread the floor and sped up the pace in Game 4.

Of course, Kerr's not revealing his next move. He even joked that he has "established my penchant for lying" about lineups so nobody should believe him.

What the Warriors believe is they have a well-established record of responding to adversity.

The change against the Cavs followed a pattern of problem solving that helped hamper Houston's James Harden, nullify Memphis' Tony Allen and negate New Orleans' Anthony Davis previously in these playoffs. The Warriors believe they're too deep, too talented and too smart to let anything negative linger.

"Every series is like a puzzle. You just try to figure it out," forward Harrison Barnes said.

"We usually get to that third game, for some reason, it lights a fire under us and we get pretty good stuff coming out," Bogut said. "I'm not sure what it is, but we've got a resilient group that wants to win."

Some adjustments, such as the lineup change, have been systematic. Others have been individual issues.

Curry thought he rushed shots early in the series. Klay Thompson said he wasn't setting his feet. Green admitted that the bright lights and swarming attention on the finals bothered him.

"I kind of just let the whole experience and everything kind of drag me down," Green said. "And I didn't necessarily have that energy and couldn't find it with just all of this, everything that's going on. I let it affect me and it affected my play. I just had to get away from that, get all that stuff out my head and just play basketball and be who I am."

Same goes for the rest of Golden State.

The Warriors are back at home — where they are 47-4, including 8-2 in the playoffs, though they never looked very sharp in splitting overtime games with the Cavs to start the series — and back in a better mind frame than when they left.

If they can follow through with another winning streak of at least three games, they'll have another banner to hang soon.