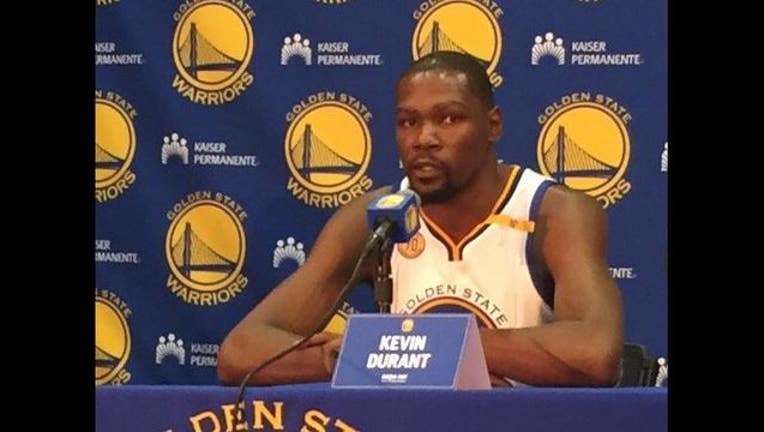 PORTLAND, Ore. (AP) - Stephen Curry had 37 points before sitting out the final quarter and the Golden State Warriors welcomed back teammate Kevin Durant with a 128-103 victory over the Portland Trail Blazers on Monday night to sweep their first-round playoff series.

The Warriors advanced to the conference semifinals, where they'll face the winner of the series between the Utah Jazz and the Los Angeles Clippers, which is tied at 2.

Golden State played for the second straight game without coach Steve Kerr, who has been experiencing a flare-up of symptoms stemming from back surgery a couple of years ago. Assistant Mike Brown has served as head coach in Kerr's absence.

Durant hadn't played since Game 1 because of a strained left calf. He started and the Warriors built a 72-48 lead by the end of the opening half.

Golden State pushed the margin to 33 points in the second half. Curry swished a 31-foot 3-pointer that made it 104-77 late in the third quarter and the Blazers couldn't catch up.

Durant finished with 10 points in 21 minutes. All of Golden State's starters were in double figures.

Damian Lillard scored 34 points for the Blazers, who were making their fourth straight appearance in the playoffs. The crowd at the Moda Center gave Lillard a standing ovation when he came out with 6:12 to play.

Last season, the Warriors defeated the Blazers 4-1 in the second round. Curry missed the first three games of that series with a sprained MCL in his right knee, but returned in time to take the series back to Golden State and advance. The Warriors, who won the NBA title in 2015, fell to the Cleveland Cavaliers in seven games in the Finals last year.

The Warriors were still without Matt Barnes (right ankle/foot sprain), and Shaun Livingston (right index finger sprain). Livingston hasn't played since Game 1 and Barnes has been sidelined the whole series.

The Blazers led Game 3 by as many as 17 points in the first half - sparked by the return of big man Jusuf Nurkic. But the lead slipped away in the third quarter and the deeper Warriors prevailed 119-113.

Nurkic, who had missed the final seven games of the regular season and the first two playoff games because of a nondisplaced fracture in his right leg, finished with two points and 11 rebounds. He was ruled out of Monday's game.

The Warriors jumped out to a 14-0 lead at the start. Durant's dunk extended the lead to 22-3 and the rout was on. JaVale McGee made a highlight-reel alley-oop dunk in route to a 45-22 lead after the opening quarter.

Lillard shouldered most of the burden for the Blazers with 21 points in the half, but backcourt partner CJ McCollum was scoreless on 0-for-7 shooting and Portland trailed 72-48 at the break.

The Warriors showed no signs of slowing in the third. Curry's 3-pointer pushed Golden State's lead to 91-58.

Kerr announced on Sunday that he would not be on the sideline for Game 4. However, he was at the Moda Center for the game. Brown said beforehand he expected Kerr would be watching from the locker room.

It is unclear how long he might be out.

Kerr still experiences lingering symptoms from complications following two back surgeries after the franchise's run to the 2015 championship. He missed the first 43 games last season dealing with symptoms such as headaches, nausea and an aching neck.

Warriors: The previous time the Warriors swept a playoff series was in 2015 against New Orleans. ... Golden State has swept six playoff series in franchise history. ... The Warriors improved to 12-1 in the first round over the past three postseasons.

Trail Blazers: The only other time the Blazers had been swept in a seven-game playoff series was in the 1999 Western Conference Final against San Antonio. ... The Blazers fell 3-0 in the first round to the Lakers in the 2000 playoffs. ... Meyers Leonard made his first career playoff start at center.

The Warriors await the winner of the series between the Jazz and the Clippers. Portland heads into the offseason.questionable going into the game. The Warriors led the series 3-0 with a chance to eliminate the Blazers.