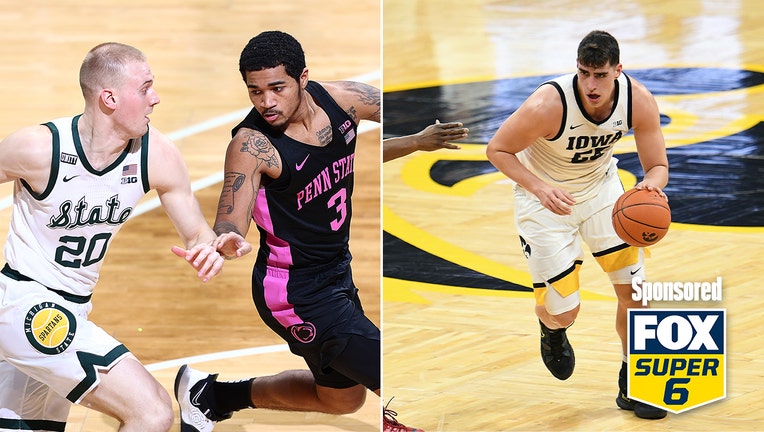 LEFT: Joey Hauser #20 of the Michigan State Spartans handles the ball under pressure from Sam Sessoms #3 of the Penn State Nittany Lions. RIGHT: Iowa center Luka Garza (55) during a college basketball game between the Rutgers Scarlett Knights and the

Late January and early February has not been kind to the Iowa basketball program in recent years. And losing four of its last six games after surging into the Top 5 for most of the season has Hawkeye fans a little nervous as the Big Ten season heads for home.

On the flip side, this is usually the time of the season when Michigan State is usually firing on all cylinders, ready for a Big Ten title and a long NCAA Tournament run. And yet, the Spartans find themselves in survival mode – outside of the Top 25, plugging along at 10-6 but facing five ranked teams in its final seven league games to potentially make it to March.

That’s what makes Saturday’s Big Ten clash in East Lansing (2:30 p.m. ET, FOX) so huge for both. And it could be huge for you if you win the $10,000 jackpot by playing FOX Super 6. Just download the FOX Super 6 app on your smart phone or tablet, predict the right answers to the six questions on this game and you could win $10,000. It’s that simple and best of all, it’s free.

Here’s the questions and how to look at it.

Which team will have the most bench points in the first half?
Iowa, Michigan State or Tie
In the first meeting between the two teams- an 84-78 win for the Hawkeyes in Iowa City on Feb. 2- the Hawkeyes bench outscored the Spartans to a tune of 39-24.  That was more pronounced in the first half, when Iowa sprinted to a 48-43 lead thanks to a 24-11 edge off their bench.

What will Iowa’s Field Goal percentage be for the game?
0-35, 36-40, 41-45, 46-50, 51-55 and 56%+
For the season, Iowa is shooting 47.5 percent from the floor. That number has slipped a little bit because of some shaky outings during their recent four losses in five game stretch. Michigan State has done a good job of holding opponents down to just 41.8% from the floor. In conference games, the Spartans are allowing teams to shoot just a marginally better 43.0 percent.

What will Michigan State’s Field Goal percentage be for the game?
0-35, 36-40, 41-45, 46-50, 51-55 and 56%+
Overall, the Spartans are shooting 42.5 percent from the floor. In the Big Ten, that number has dipped to 38.9 percent – a stat that has been critical to the Spartans lack of success in conference play. Teams have shot relatively well against Iowa’s defense- the Hawkeyes are allowing teams to hit 42.0 percent overall and 42.8 percent in league play.

How many points will Michigan State score in the game?
0-65, 66-70, 71-75, 76-80, 81-85, 86+ points
Michigan State is averaging 71.5 points scored per game and 64.2 points within conference play. One of the biggest problems that Tom Izzo’s team has found is lack of reliable scoring depth- only two Michigan State players (Aaron Henry and Joey Hauser) are averaging in double figures. The good news is Iowa’s defense is surrendering 75.1 points a game.

Pick the team to win and by how many points
Iowa by 1-3, Iowa by 4-7, Iowa by 8+, Michigan State by 1-3, Michigan State by 4-7, Michigan State by 8+
The first game between the two is less than two weeks ago and the Hawkeyes won that by eight at a time when they’ve struggled to get much going. However, Michigan State has been much better at home – 8-2 at East Lansing, 2-5 on the road- and they have to play with an air of desperation at this point to get into the tournament.