FOX 13's Kevin O'Donnell asked Tom Brady what it was like to get a misdial from a group of high school basketballers from Michigan.

TAMPA, Fla. - For a group of high school basketball players in Michigan, one missing digit in a phone number led to a once-in-a-lifetime video chat with the Tampa Bay Buccaneers.

The Notre Dame Preparatory freshmen boys’ basketball team started a group chat in November, but one of the players accidentally typed the wrong number for one of the teammates, reports ESPN. The rest of the story was chronicled by one of the school counselors on Twitter.

"This random guy replies to the group, ‘Did you mean to add me to this group?’" according to a tweet by P. Jason Whalen. His son, Colin, is on the freshman basketball team.

The Bucs' star running back says he would have loved to have gotten a call from Tom Brady when he was a kid.

The "random" person on the other end of the chat was cornerback Sean Murphy-Bunting. He is originally from Macomb Township in Michigan, which is about 30 minutes away from Notre Dame, located in Pontiac.

The boys, on the other hand, were still quite skeptical and believe their friend was joking with them.

After some more back-and-forth, Murphy-Bunting FaceTimes the group while inside the team's locker room. The Bucs player hands his phone to Leonard Fournette and the running back went on to introduce the boys to Mike Evans, Rob Gronkowski, and Richard Sherman.

Whalen said the young boys started "getting greedy" and requested to see the GOAT, Tom Brady.

The Bucs quarterback eventually appears on FaceTime and asks, "What's up fellas?"

Eventually, all good things must come to an end. After briefly speaking to Brady, Murphy-Bunting ended the video call saying, "Ball out this season," according to Whalen.

The basketball team promised not to make the cornerback's phone number public. 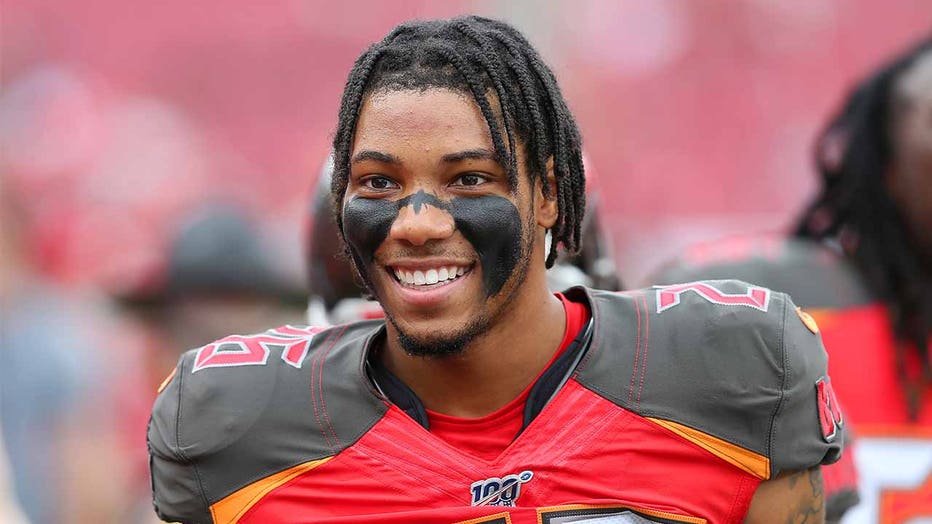 Sean Murphy-Bunting is all smiles before the start of a 2019 game in Tampa, Fla. Murphy-Bunting grew up in Michigan, just 30 minutes away from the school where a high school basketball team accidentally got his phone number right. (Photo by Cliff Wel

"I can’t believe they took the time to entertain Colin and his teammates," Whalen shared on Twitter. "I’m sure they had a good time laughing at the fact that the Super Bowl champs got randomly added to a freshman basketball team group chat."