Hurricane Delta made landfall on Friday. Meteorologist Stephanie Weaver breaks down what to expect.

The center of the hurricane made landfall about 6 p.m. near the town of Creole with top winds of 100 mph (155 kph), though it rapidly grew weaker. Within an hour of Delta hitting land, the National Hurricane Center downgraded it to a Category 1 storm with 90 mph (150kph) winds.

Still, forecasters warned Delta's storm surge that could reach up to 11 feet (3.4 meters), and flash flood warnings were posted for much of southwest Louisiana and parts of neighboring Texas.

As the 10th named storm to strike the continental U.S. this year, Delta's arrival snapped a century-old record.

People in south Louisiana steeled themselves as Delta delivered driving rain, powerful winds and rising water to a part of the state still recovering from a deadly catastrophic hurricane six weeks ago. Power outages in Louisiana and neighboring Texas soared past 203,000 homes and businesses Friday shortly after the storm came ashore, according to the tracking website PowerOutage.us.

In the city of Lake Charles, about 30 miles (50 kilometers) inland from where Delta made landfall, rain pelted the tarp-covered roofs of buildings that Hurricane Laura battered when it barreled through in late August and killed at least 27 people in the state.

“It’s devastating and it’s emotional for the citizenry,” Mayor Nic Hunter said as he prepared to ride out the storm in downtown Lake Charles.

Winds picked up Friday evening in inland areas such as Lafayette, where occasionally strong gusts buffeted trees and sheets of rain were falling. Many parishes and towns implemented curfews Friday until Saturday morning to encourage people to stay off the roads during the worst of the storm.

Dawn Trosclair checked into a hotel Friday, worried about trees falling on her home in Lafayette.

“No other storm really threatened us," Trosclair said as she watched the gusting winds. "Laura was far enough away and the winds were going to be mild enough here where we didn’t leave.”

Laura damaged about 95% of the homes and buildings in Lake Charles, while up to 8,000 residents — 10% of the population — remain displaced, the mayor said. Piles of moldy mattresses, sawed-up trees and other leftover debris lined the city's largely vacant streets Friday, arousing concern they could cause more damage and deaths when the new storm strikes.

“We just got lights back on like two weeks ago and then evacuating again? It’s extremely hard,” said Roslyn Kennedy. She was among a handful of evacuees at the Burton Coliseum in Lake Charles, waiting to be transported, again, to safer destinations.

Hurricane Delta made landfall as a Category 2 storm on the southwestern coast of Louisiana, near Creole.

Life-threatening storm surge, flash-flooding and damaging winds will be possible in Eastern Texas, Louisiana and Mississippi.

Delta is moving quickly and will move through Louisiana Friday before continuing to move northeastward. The system is expected to move over the lower Mississippi Valley through the weekend and weaken rapidly.

Delta continues to gradually weaken and was downgraded to a Category 2 hurricane Friday afternoon.

Winds have weakened to 105 mph, but winds continue to gust near 60 mph on the Gulf Coast.

About 25,000 customers are currently without power in Texas and Louisiana according to poweroutage.us.

Delta's rainbands continue to lash the Louisiana coast, and the system is expected to make landfall within the next couple of hours.

Hurricane Delta is a Category 3 storm spinning off the Gulf Coast near Louisiana. Its outer bands have already begun lashing the coastal areas of the state.

Delta has weakened slightly, but is still packing winds of 115 mph. Winds have already started gusting over 50 mph in Lake Charles.

Unlike Laura, Delta is moving much quicker. The system will move through Louisiana Friday and will continue to move northeastward. Delta is expected to move over the lower Mississippi Valley through the weekend and weaken rapidly.

Storm surge warnings were in effect Friday afternoon from High Island, Texas to the mouth of the Pearl River. According to the National Hurricane Center (NHC), the highest flood inundation, between 7 to 11 feet above ground, is expected between the Rockefeller Wildfire Refuge and Morgan City, Louisiana.

Gusts up to 60 mph will be possible with the system, which can cause tree damage and power outages.

Heavy rain will lead to flash flooding and minor to major river flooding in parts of Louisiana. Rainfall amounts between 5-10 inches will be possible for coastal areas, and isolated areas could see up to 15 inches.

Boarded windows and empty sidewalks made parts of Louisiana's Acadiana region look like empty movie sets as major Hurricane Delta roared ever closer to the U.S. Gulf coast, apparently on track to smash into the same southwestern part of the state where Hurricane Laura blasted ashore six weeks ago.

Forecasters said Delta — the 25th named storm of an unprecedented Atlantic hurricane season — would likely crash ashore Friday evening somewhere on southwest Louisiana's coast. The question was whether it would remain at devastating Category 3 strength, with top winds of 120 mph (195 kph) early Friday, or drop just before landfall to a still extremely dangerous Category 2 storm.

Either way, Delta is such a large hurricane that the storm surge risk remains high even if it becomes less intense just before striking land, the National Hurricane Center said.

People in this battered coastal region were taking Delta seriously.

“You can always get another house another car but not another life,” said Hilton Stroder as he and his wife Terry boarded up their Abbeville home with plans to head to their son's house further east.

As Delta churned north at 12 mph (19 kph) on Friday morning, the National Hurricane Center had a hurricane warning in place for the Gulf Coast extending from High Island, Texas, to Morgan City, Louisiana.

It marked the sixth time this season that Louisiana has been threatened by tropical storms or hurricanes. One fizzled at the southeast Louisiana tip and others veered elsewhere but Tropical Storm Cristobal caused damage in southeast Louisiana in June. And Laura demolished much of the southwestern part of the state on Aug. 27, causing more than 30 deaths.

Life wasn’t at a complete standstill though. A gas station was doing steady business as people filled their cars and spare gasoline cans and a grocery store served last customers stocking up. Similar scenes played out not far away in New Iberia, where the few signs of life included cars lined up at a drive-thru daquiri shop and people grabbing food at take-out restaurants.

Louisiana Gov. John Bel Edwards noted in a radio show that Delta appeared headed for the area near the Texas state line that was devastated by Laura, including Lake Charles and surrounding Calcasieu Parish, and rural Cameron Parish on the coast. “And we’ve got people who are very tired,” he noted. 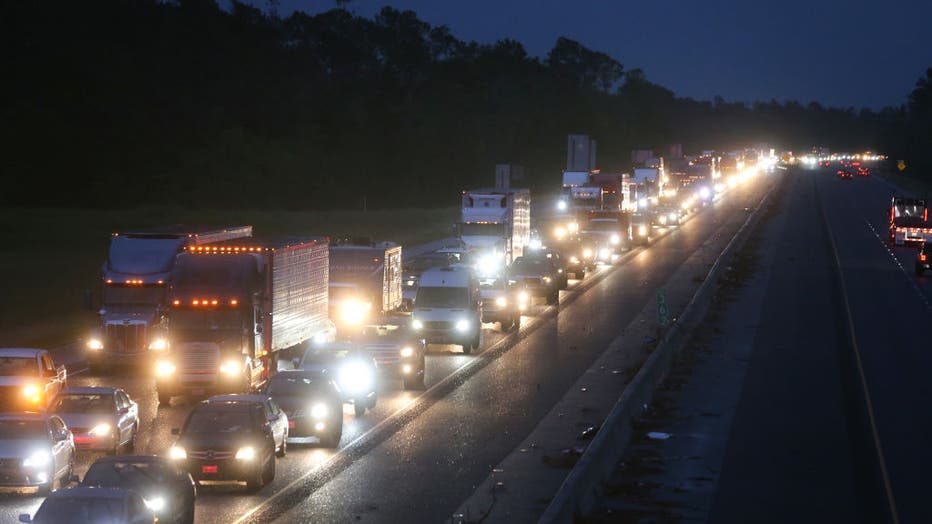 Traffic is jammed on I-10 westbound amid evacuations ahead of Hurricane Delta on October 8, 2020 in Lake Charles, Louisiana. (Photo by Mario Tama/Getty Images)

“People of Lake Charles and in Cameron Parish have already suffered enough, and then here comes this one,” said Desi Milligan, who owns an RV park in Cameron that was heavily damaged by Laura.

People in the disaster zone had unusual clarity about the damage Delta's storm surge could cause. It was predicted to reach as high as 11 feet (3.4 meters) along a stretch from the Rockefeller Wildlife Refuge near the Texas state line to Morgan City, Louisiana. Laura — which made landfall in the same area on Aug. 27 as a Category 4 hurricane with top winds of 150 mph (240 kph) — pushed a storm surge that reached 12 feet (4 meters), Edwards said.

Reminders of Laura's danger are everywhere in the region. In nearby Bell City, some debris piles are more than 6 feet (2 meters) high and 75 feet (23 meters) long. Concerns mounted Friday that Delta’s arrival would cause the debris to become airborne, deadly projectiles.

Though homes and farmhouses in the area still stood, blue tarms covered many rooftops with lingering damage from Laura. In Cameron Parish, power poles along Highway 27 in a desolate stretch of marsh were all either broken or leaning — none appeared to have been repaired since the August storm.

A few miles down the road, Creole presented a scene of utter devastation under an overcast sky that soon gave way to pouring rain. Where there used to be buildings, exposed slabs remained. A church and a convenience store had been reduced to debris, and fences were blown over or completely torn down.

Delta had already clipped Mexico's Yucatan Peninsula as a Category 2 hurricane just south of the resort city of Cancún early Wednesday, bringing high winds and heavy rain. No deaths or injuries were reported there.

New Orleans, well east of the projected landfall area, was expected to escape Delta's worst impacts. But tropical storm force winds were still likely in the city on Friday, and local officials said they were preparing for the possibility of tornadoes.

And in Mississippi, Gov. Tate Reeves declared a state of emergency like his counterpart Edwards did in Louisiana. Forecasters said southern Mississippi could see heavy rain and flash flooding.

In Abbeville, Tony Russo was loading up on groceries late Thursday. “I don’t know really any different,” he replied when asked his reaction to the busy storm season. “You’re here. If you love it you stay,“ he said. But he added with a chuckle: “2020 has been a hell of a year.”