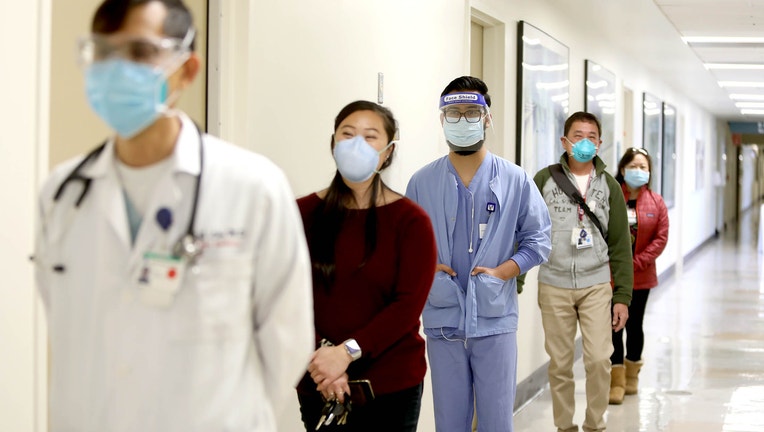 REDWOOD CITY, Calif. - As of Tuesday, 159,357 San Mateo County residents have received at least the first dose of the COVID-19 vaccine, representing 24.8 percent of the county's population age 16 and older who would be eligible for the vaccine.

The county is currently vaccinating Phase 1A and 1B groups, which include health care workers, residents of long-term care facilities, those age 65 and older and workers in the education, child care, food and agriculture and emergency services sectors.

Deputy Chief of San Mateo County Health Srija Srinivasan said during a media briefing Wednesday that 66 percent of residents age 65 and older have been vaccinated so far and the county is working to reach the rest of that population.

"We know that the older adults we haven't reached are residents who may have additional barriers," Srinivasan said, adding that some may require transportation or assistance walking up to the vaccination sites.

Second-dose vaccinations at the San Mateo County Event Center continue Thursday, with up to 3,200 appointments available each day. A first dose clinic will take place Friday and Saturday for eligible groups.

The county has also operated smaller vaccine clinics in Daly City and Half Moon Bay.

Some state and city leaders have called for increased vaccinations in East Palo Alto, which has had one of the highest case rates in the county but one of the lowest vaccination rates -- 12 percent -- and less than half the countywide rate of 24.8 percent.

Srinivasan said that East Palo Alto's low vaccination numbers could be due to the city's demographics, as only 12 percent of the city's population is 65 and older compared to the countywide average of 17 percent.

"It is absolutely a priority to the county that the vaccine reach be as equitable as possible," Srinivasan said. "The criteria for eligibility for the vaccine has not been by geographic community or by the case rates."

While many essential workers live in East Palo Alto, eligibility for those groups only opened on Feb. 22, so the city's younger population did not have access to the vaccine before then.

In a statement, Deputy County Manager Justin Mates said that the county is working with community partners with deep roots in East Palo Alto to increase trust in the vaccine and overcome barriers such as digital access or transportation access. So far, first- and second-dose clinics have taken place through the Ravenswood Family Health Center in East Palo Alto.

When asked on Wednesday whether a mass vaccination center in the south county is being considered, County Manager Mike Callagy said they were considering all options.

"The plans are certainly fluid and we will certainly look at that but we really want to get more into the neighborhoods, I believe, and make it easier for people to access vaccinations on a walk-up basis or even more micro than that," Callagy said.

In terms of missed appointments, Srinivasan said that the no-show rates have fluctuated around 5 percent and he encouraged the public to cancel appointments if they've signed up elsewhere.

In addition, Srinivasan said they learned Tuesday night that Sutter Health had to cancel some second-dose appointments, including some at the event center, due to supply constraints from the state. She said the county is waiting to learn how many residents have been affected.

The county has not received the vaccine supply needed to replace those appointments but Srinivasan said they would work with Sutter to get those doses administered by other pathways, ensuring that people receive the vaccine -- Pfizer or Moderna -- that matches their first dose.

The state is expected to open vaccine eligibility March 15 for the next group, people 16 to 64 years old with underlying conditions.

Srinivasan said they are waiting to find out how many vaccine doses are expected next week.

Though the county does not yet know how much of the Johnson & Johnson vaccine it will receive, Srinivasan and Callagy encouraged people to take it when it becomes available.

"The best shot is the one that goes into your arm," Callagy said. "All of these are effective in preventing death and serious illness. They've all been FDA approved. They're all very good vaccines to get. We encourage everyone to take whatever vaccine is available as soon as its available."