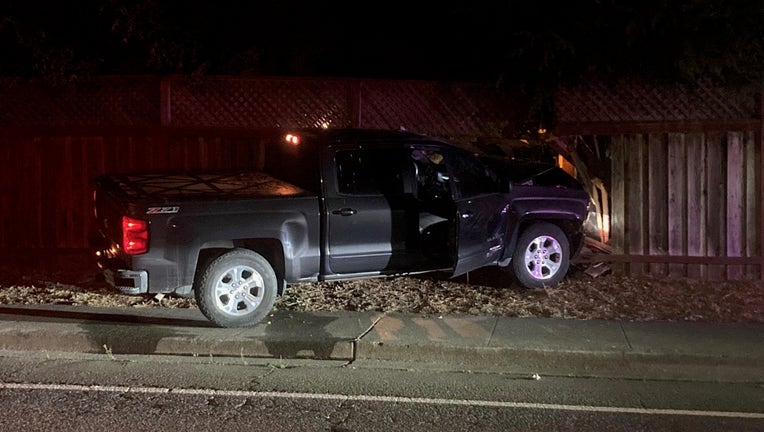 Petaluma police released this photo of a truck crashed into a fence. They said a 15-year-old girl stole the truck and crashed it while intoxicated.

PETALUMA, Calif. - Petaluma police said a 15-year-old girl was arrested Saturday for stealing and crashing a truck, then fleeing the scene.

Just before 1 a.m., police said they received reports of a Chevrolet truck that crashed into a fence at Caulfield Lane at Park Lane.

When officers arrived, nobody was in the truck. Witnesses said the driver had fled on foot from the scene, and pointed them in the direction of the suspect.

After a search of the area, police said they located a subject that matched the description provided by the witnesses. She was a 15-year-old girl who displayed signs of alcohol impairment, police said.

It was determined the truck was an unreported-stolen vehicle, taken from the 1500 block of Sunrise Parkway.

The girl was arrested for vehicle theft, burglary, hit-and-run, and DUI. After being medically cleared at a local hospital, she was booked at the Sonoma County Juvenile Hall.