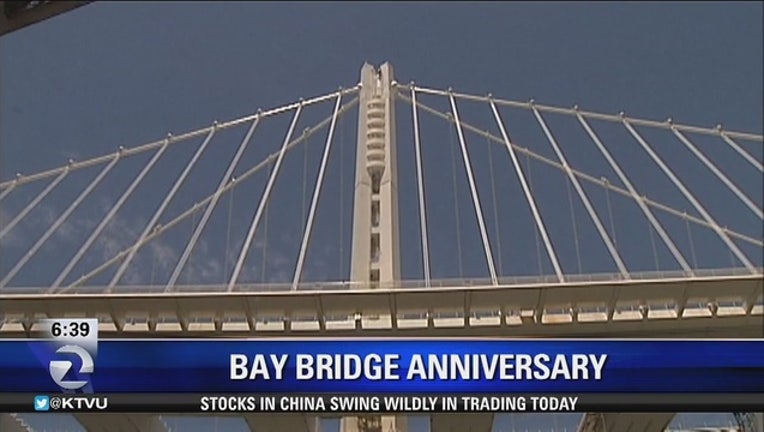 OAKLAND, Calif. (BCN) -- The Bay Bridge Program Oversight Committee withheld $15.2 million in payments for delays and problems with construction on the new eastern span of the Bay Bridge as it closed the bridge's construction contract Thursday.

But the committee also authorized up to $4.3 million in additional overhead costs for the joint venture of American Bridge Company and Flour Corporation in closing the roughly $1.8 billion contract.

The most substantial withholding from the contract today was $8 million to recoup part of $24 million in repairs necessary for problems with anchor rods on the bridge's east pier that delayed the bridge's opening in 2013. The committee also announced it would file an $8 million claim against designers TY Lin and Moffett & Nichol for that problem.

Another $3 million was withheld from American Bridge and Flour for ongoing issues with anchor rods at the bottom of the bridge's tower that were improperly grouted, allowing water to seep in. The committee reserved the right to file claims to recoup future losses for that problem as repairs continue.

Those repairs could cost up to $25 million more than the $4.3 million already allocated, bridge chief engineer Brian Maroney told the committee. The committee did not approve any future funding for those repairs Thursday, preferring to study the issue further.

The plan Maroney presented today did not involve replacing the 424 rods in the base of the bridge's 525-foot tower, but instead replacing faulty grout to keep water out, likely some kind of grease.

"Get this grout out of here," Maroney said. "It was put in wrong, it was inspected wrong, it's not doing what it was supposed to do."

He said the bridge is seismically sound with or without the rods. Simulations conducted by a panel of experts convened to study the problem showed miniscule differences in performance in the event of a major earthquake. In the simulations, the tower only moved millimeters, he said.

Four of the roughly 25-foot-long rods have already been removed for study. Three of those rods were revealed through examination with an electron microscope to have microscopic fractures. The fourth had no fractures on it but threads had been stripped.

But Maroney said that the rods do not need to be replaced, despite a quarter of them steeping in bay water. When asked if the fractures were indicative of hydrogen embrittlement -- the culprit for the 32 rods in the east pier that snapped in 2013, delaying the bridge's opening -- Maroney said there was no solid evidence to support that statement, though some of the experts on the panel thought it was possible.

The most important step to take will be to remove the improperly installed grout and replace it, Maroney said. That work, plus further study on the problem, should be completed by the end of next year and will cost between $15 million and $25 million, he said.

But despite the steep cost, Maroney described the problem as "miniscule" and not significant for the overall performance of the bridge.

"This is a fantastic bridge. The cables, the steel, everything," Maroney said. "I tend to focus on what I'm not happy with."

While the committee had reservations about the problems and delays that have cropped up during the nearly two decades it took to design and construct the bridge, overall they were pleased with the end result.

"Getting our bridges earthquakes safe was a race against time, and I am happy to say that we won that race," committee chair Steve Heminger said. "We got this bridge built before the earthquake hit."

But he said the contractor needs to be held responsible for the problems during construction and not tollpayers.

"They've paid for a safe and stunning new bridge and they got one, but they shouldn't have to pay for substandard work," Heminger said. "The work with these exceptions was done to the highest standards of the industry."