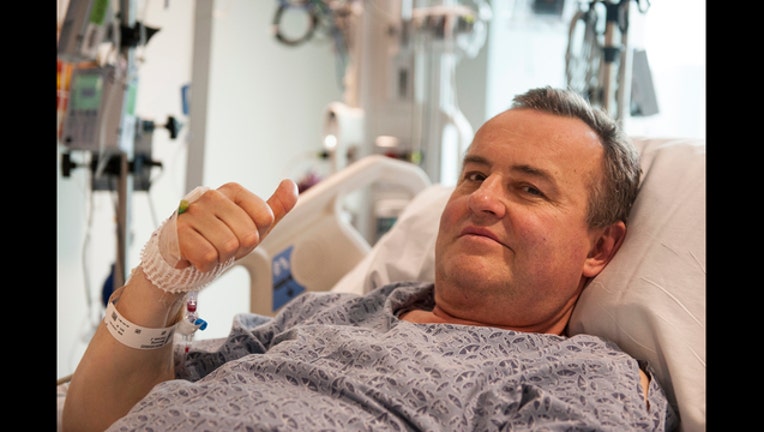 Thomas Manning gives a thumbs up after being asked how he was feeling following the first penis transplant in the United States, in Boston. The organ was transplanted from a deceased donor. (Sam Riley/Mass General Hospital via AP)

BOSTON (AP) - A 64-year-old cancer patient has received the nation's first penis transplant, a groundbreaking operation that may also help accident victims and some of the many U.S. veterans maimed by roadside bombs.

In a case that represents the latest frontier in the growing field of reconstructive transplants, Thomas Manning of Halifax, Massachusetts, is faring well after the 15-hour operation last week, Massachusetts General Hospital said Monday.

His doctors said they are cautiously optimistic that Manning eventually will be able to urinate normally and function sexually again for the first time since aggressive penile cancer led to the amputation of the former bank courier's genitals in 2012. They said his psychological state will play a big role in his recovery.

"Emotionally he's doing amazing. I'm really impressed with how he's handling things. He's just a positive person," Dr. Curtis Cetrulo, who was among the lead surgeons on a team of more than 50, said at a news conference. "He wants to be whole again. He does not want to be in the shadows."

Manning, who is single and has no children, did not appear at the news conference but said in a statement: "Today I begin a new chapter filled with personal hope and hope for others who have suffered genital injuries. In sharing this success with all of you, it is my hope we can usher in a bright future for this type of transplantation."

The identity of the deceased donor was not released.

The operation is highly experimental — only one other patient, in South Africa, has a transplanted penis. But four additional hospitals around the country have permission from the United Network for Organ Sharing, which oversees the nation's transplant system, to attempt the delicate surgery.

The loss of a penis, whether from cancer, accident or war injury, is emotionally traumatic, affecting urination, sexual intimacy and the ability to conceive a child. Many patients suffer in silence because of the stigma their injuries sometimes carry; Cetrulo said many become isolated and despondent.

Unlike traditional life-saving transplants of hearts, kidneys or livers, reconstructive transplants are done to improve quality of life. And while a penis transplant may sound radical, it follows transplants of faces, hands and even the uterus.

"This is a logical next step," said Dr. W. P. Andrew Lee, chairman of plastic and reconstructive surgery at Johns Hopkins University School of Medicine.

His hospital is preparing for a penis transplant in a wounded veteran soon, and Lee said this new field is important for "people who want to feel whole again after the loss of important body parts."

Still, candidates face some serious risks: rejection of the tissue, and side effects from the anti-rejection drugs that must be taken for life. Doctors are working to reduce the medication needed.

Penis transplants have generated intense interest among veterans from Iraq and Afghanistan, but they will require more extensive surgery since their injuries, often from roadside bombs, tend to be more extensive, with damage to blood vessels, nerves and pelvic tissue that also will need repair, Lee noted.

The Department of Defense Trauma Registry has recorded 1,367 male service members who survived with genitourinary injuries between 2001 and 2013. It's not clear how many victims lost all or part of the penis.

A man in China received a penis transplant in 2005. But doctors said he asked them to remove his new organ two weeks later because he and his wife were having psychological problems.

In December 2014, a 21-year-old man in South Africa whose penis had been amputated following complications from circumcision in his late teens received a transplant.

Dr. Andre van der Merwe of the University of Stellenbosch told The Associated Press that the man is healthy, has normal sexual function and was able to conceive, although the baby was stillborn. But his recovery was difficult, with blood clots and infections, the doctor said.

For congenital abnormalities or transgender surgery, doctors can fashion the form of a penis from a patient's own skin, using implants to achieve erection. But transplanting a functional penis requires connecting tiny blood vessels and nerves.

A bigger challenge than the surgery itself is finding donor organs.

"People are still reluctant to donate," van der Merwe said. "There are huge psychological issues about donating your relative's penis."

In the U.S., people or their families who agree to donate organs such as the heart or lung must be asked separately about also donating a penis, hand or other body part, said Dr. Scott Levin, a hand transplant surgeon at the University of Pennsylvania and vice chairman of UNOS' committee on reconstructive transplants.

In Boston, Cetrulo said the transplanted penis has good blood flow and so far shows no signs of rejection. He said that Manning should be released from the hospital soon, and that the surgery had three aims: ensuring the transplanted penis looks natural, is capable of normal urination — which he hopes will resume in a few weeks — and eventually normal sexual function.

Reproduction won't be possible, he said, since Manning did not receive new testes.

Dr. Dicken Ko, who directs the hospital's urology program, said Manning has been shown post-operation photos but hasn't actually seen his new penis, since it is still bandaged. A big test, Ko said, will be when reconnected nerves start to take hold, bringing feeling back to the organ.

"We don't know how he would feel until that times comes," he said.

Associated Press writers Patrick Mairs in Philadelphia and Maria Cheng in London contributed to this report. Neergaard reported from Washington.