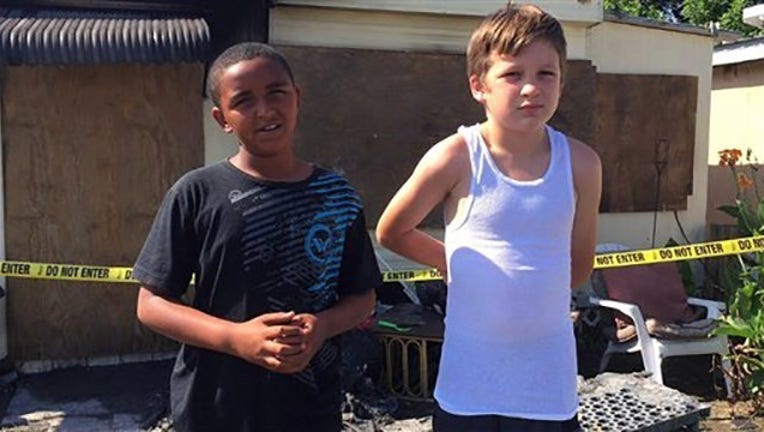 OAKLAND, Fla. (AP) — Typical of their hot summer days free from school, 11-year-old Jeremiah Grimes and 10-year-old Isiah Francis were plopped on the couch watching YouTube and playing video games, but Tuesday they smelled something unusual.

When they looked out the window, they saw smoke streaming from the home next door.

As Jeremiah put on his shoes, Isiah ran next door, where he encountered the neighbor frantically searching for water to douse the flames. The man told him two young children were in the kitchen.

Isiah went inside and, with Jeremiah's guidance, plucked the 1-year-old and 8-month-old from the burning home.

"It was really smoky," Isiah said. "I could kind of see, but I had to use my sense of touch."

Two other children in the home were rescued by firefighters who arrived moments later, after Jeremiah called 911.

Heroism had little to do with it — instinct kicked in, Jeremiah said. Both boys had been trained at school to call 911 in the event of a fire.

"I was just doing it," Jeremiah said. "Basic instinct took over."

Kat Kennedy, a spokeswoman for Orange County Fire Rescue, said Wednesday that "one or two young boys called 911 and went into the burning home and saved those two children." An official incident report hadn't yet been released.

The boys' accounts veer slightly in their separate retellings.

Isiah said Jeremiah was telling him which way to go from the door of the home since he could see better outside the intensity of the smoke. Isiah said he scooped up the toddler and infant, who were sitting on the floor, and he gave the infant to Jeremiah. They then ran to Isiah's house down the lane.

Under Jeremiah's telling, Isiah went in first and he followed, but they both went into the kitchen to rescue the children, who were uninjured.

The two children rescued a short time later by firefighters were in critical but stable condition at Arnold Palmer Hospital.

The cause of the blaze hasn't been determined. Yellow police tape surrounded the burned-out home Wednesday.

"I just wanted to help those kids," Isiah said.