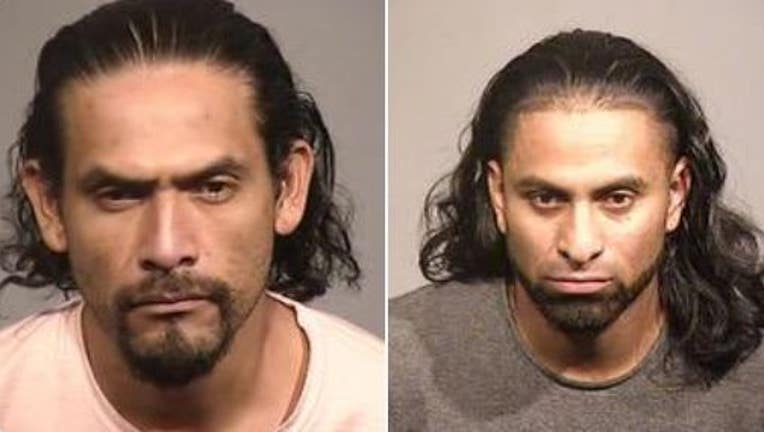 PETALUMA, Calif. - A Petaluma bank's alert that someone was passing a suspected bad check on Monday led to the arrests of two Los Angeles men suspected of stealing mail and cashing checks from more than 200 victims statewide.

Staff at the bank on South McDowell Boulevard alerted police shortly after 9 a.m. that someone was attempting to cash an altered check for $1,100.

Officers contacted Juan Nunez-Alvarado, 30, as he left the bank and walked to a car, where the other suspect, Anderson Hernandez, was waiting.

Nunez-Alvarado was detained and officers found that he had other personal checks on him that were not in his name. While police were talking talked to Hernandez they noticed a large, open trash bag with opened mail in the vehicle and then searched the car.

They found several pieces of mail and checks -- none of it in either suspect's name.

Officers then spent hours going through the mail, as well as business and personal checks, which had already separated by the suspects.

They eventually concluded there were more than 200 suspected victims in several cities in 14 counties across California, including 57 victims in Sonoma County. Officers are working to contact all the victims.

Of the Sonoma County victims contacted thus far, it is believed the suspects retrieved mail left in U.S. Postal boxes over the prior weekend, when mail is not removed until weekdays.

Petaluma police are working with the U.S. Postal Inspector to notify all other suspected victims outside Sonoma County, who can then contact their respective jurisdictions.

Nunez-Alvarado was arrested on suspicion of burglary, forgery, passing fictitious checks, intent to defraud 10 or more persons, and possession of controlled substance.

Hernandez was arrested on suspicion of possessing fictitious checks and intent to defraud 10 or more persons. Both were booked into the Sonoma County Jail.

Petaluma PD strongly encourages residents, if not paying bills online, to place outgoing bills directly in your local Post Office branch instead of mailboxes, and to not leave mail in boxes on weekends.