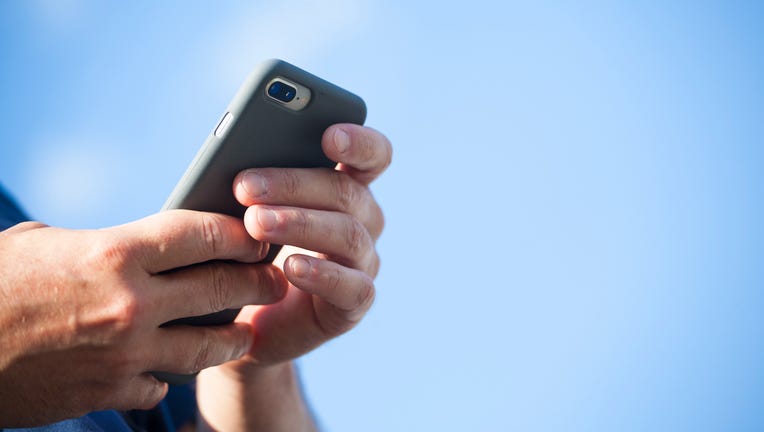 A file image taken June 1, 2018 shows a man typing on his smartphone. (Photo by Maciej Luczniewski/NurPhoto via Getty Images)

EUREKA, Calif. (AP) - Two Northern California police officers are on paid leave after a news outlet reported that they are accused of sending degrading and violent text messages about women, people with mental illness and the homeless.

Eureka Police Chief Steve Watson announced Wednesday that Sgt. Rodrigo Reyna-Sanchez and Officer Mark Meftah were on leave "effective immediately," hours after The Sacramento Bee published its report about the vulgar text messages allegedly sent in a group chat. Watson said an outside investigator would conduct a review.

"While we leave room for the investigation to reveal more information, we also fully denounce the content of the communications that have been reported," Watson wrote in a message posted to Facebook, adding that he was "deeply saddened and disturbed" by the texts.

The Eureka Police Officers’ Association condemned the messages as abhorrent and egregious, and urged a fair and prompt investigation.

Reyna-Sanchez and Meftah did not comment to The Bee. The Associated Press could not reach the officers for comment Thursday. Messages to the police and police union seeking someone to speak on their behalf were not immediately returned.

The text messages were allegedly circulated among six officers on a single squad led by Reyna-Sanchez, who burst out in anger in April 2020 after a suspect posted bail and walked out of jail. He urged his team to shoot the suspect if spotted, according to messages reviewed by the news organization.

Watson said the messages occurred between January to August of last year.

Eureka is a coastal town of 27,000 people and the seat of Humboldt County. The department has worked hard to change its image and improve relations with residents, including minorities and people experiencing homelessness, the chief said.

Meftah bantered with the sergeant about women’s bodies and said he would "beat down" protesters he called hippies, according to the messages reviewed by The Sacramento Bee. They joked about homeless people having sex in public.

In one exchange, they talked about a woman with a history of mental illness and a shoplifting habit, the newspaper reported.

"Get pics of her rack!!" Reyna-Sanchez wrote, according to the newspaper.