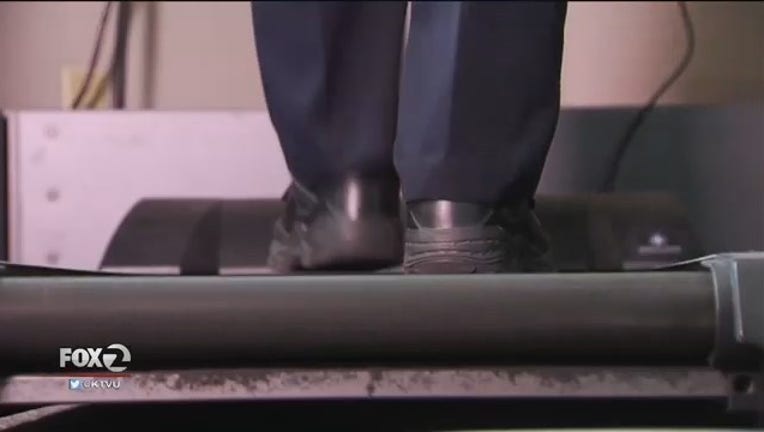 SANTA CLARA COUNTY, Calif. (KTVU) – Two agencies in Santa Clara County are helping to improve the health of their employees by adding treadmill desks and a stationary bike to work stations.

The City of Santa Clara Communications Center most recently added a treadmill desk to their operations center four months ago. Employees take turns walking on the treadmill while answering 911 calls during their shifts.

Veteran dispatcher Lee Jett said sitting down at a desk for the past 25 years got monotonous, which is why walking at work is a lot of fun.

According to Santa Clara Communication Operations Manager Judi Dziuba, the treadmill is designed to only move up to four miles per hour. The treadmill does not have an incline and jogging or running is not allowed for safety reasons.

"Research does show that people with sedentary jobs are at a higher risk for health problems," Dziuba said.

The only other agency in Santa Clara County with a treadmill desk is in Sunnyvale. It was installed inside the Sunnyvale Dispatch Center in May 2014. Their most recent addition is a stationary bike.

Jill Ahearn, a veteran dispatcher in Sunnyvale, said she has enjoyed the change of pace.

"Being able to exercise during your shift, it's a huge benefit to us to not have to be sedentary for that long," Ahearn said.

She can log up to 10 miles a day while at work.

"We've had dispatchers do a full marathon on here during their shift, they put in 26 miles," Ahearn added.

Sunnyvale Police Captain Jeff Hunter said they are using the fitness desks as incentives to recruit dispatchers. There are currently two dispatcher openings in Sunnyvale.

"If someone wants to walk at work, we are hiring," Hunter said.

Back in Santa Clara, Dziuba said employees are not required to use the treadmill desk, but any time on the machine is valuable.

"If a dispatcher can do that on duty and get 10 minutes of walking in their daily life, the city gets behind that and realizes it's not only a benefit to the employee, but also to the city itself because we are going to have happier, healthier employees," Dziuba said.