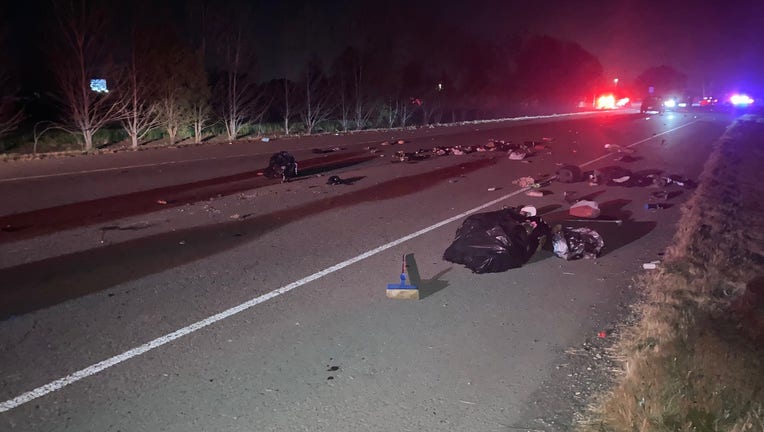 The scene of a fatal crash that occurred at about 11:27 p.m. Saturday, April 17, on Stony Point Road between Pepper Road and Rainsville Road (photo courtesy of Petaluma Police Department).

PETALUMA, Calif. - A 21-year-old Santa Rosa man suspected of drunken driving was arrested in connection with a fatal crash late Saturday in Petaluma.

The pickup rolled several times and the 52-year-old man behind the wheel was ejected. He was the only one inside the pickup, police said.

Emergency crews pronounced the man dead at the scene. His name was not released pending notification of next of kin.

Matsler-David's car continued on after the crash and went over a concrete barrier, eventually landing in Lichau Creek. He was the only person in the Civic. The suspect was taken to a hospital, and while he was given medical aid, officers noticed an odor of alcohol.

An investigation was conducted and after Matsler-David was treated, he was arrested on suspicion of felony DUI causing injury and vehicular manslaughter while intoxicated.

The Petaluma Police Department Traffic Unit is continuing to investigate the collision. Anyone who witnessed the crash is asked to contact Traffic Officer Chris Ricci at (707) 781-1275.