President Joe Biden pleads with parents to get children vaccinated

President Joe Biden addressed the country after U.S. health officials signed off on five to 11 year old getting the Pfizer COVID-19 vaccine.

The requirement issued Thursday by the federal Occupational Safety and Health Administration applies to businesses with more than 100 employees. Their workers must be vaccinated against COVID-19 by Jan. 4 or face mask requirements and weekly tests. The lawsuits ask courts to decide whether the administration's effort to curtail the pandemic represents a federal power grab and usurps the authority of states to set health policy.

"This mandate is unconstitutional, unlawful, and unwise," Missouri Attorney General Eric Schmitt said in a court filing in the St. Louis-based 8th U.S. Circuit Court of Appeals on behalf of 11 states.

Schmitt said Missouri has 3,443 private employers who could be covered by the vaccine requirement, with nearly 1.3 million employees. He said he sued "to protect personal freedoms, preserve Missouri businesses, and push back on bureaucratic tyrants who simply want power and control."

RELATED: US mandates COVID-19 vaccines or tests for big companies by Jan. 4, 2022 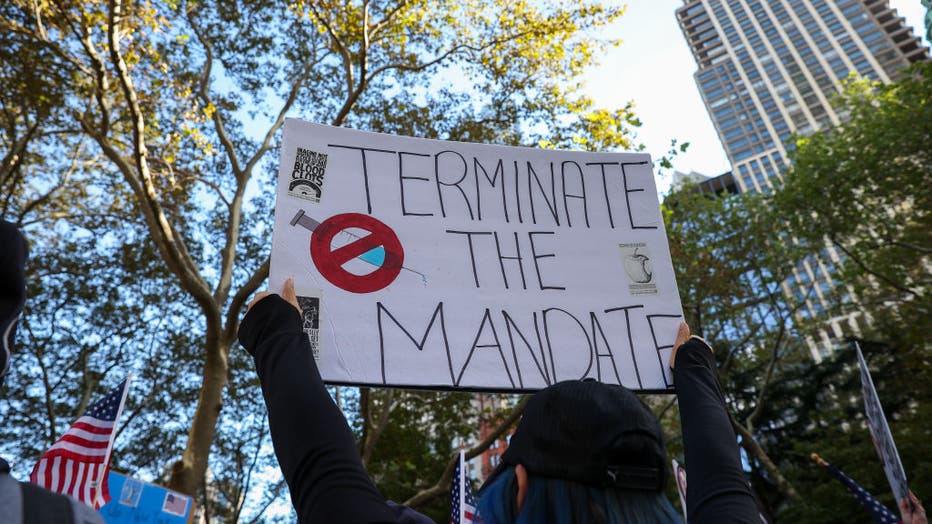 The Biden administration has been encouraging widespread vaccinations as the quickest way out of the pandemic. A White House spokeswoman said Thursday that the mandate was intended to halt the spread of a disease that has claimed more than 750,000 lives in the U.S.

The administration says it is confident that its requirement, which includes penalties of nearly $14,000 per violation, will withstand legal challenges in part because its safety rules pre-empt state laws.

"The administration clearly has the authority to protect workers, and actions announced by the president are designed to save lives and stop spread of COVID," Karine Jean-Pierre, a spokeswoman for the White House, said during a briefing Thursday.

"I think that Biden is on rock-solid legal ground," he said.

Critics have taken aim at some aspects of the requirement, including that it was adopted as an emergency measure rather than after the agency's regular rule-making process.

"This is a real emergency," said Gostin, who has spoken with the Biden administration about the requirement. "In fact, it’s a national crisis. Any delay would cause thousands of deaths."

Missouri's lawsuit was joined by the Republican attorneys general of Alaska, Arizona, Arkansas, Montana, Nebraska, New Hampshire, North Dakota, South Dakota and Wyoming. Also joining the lawsuit was the office of Iowa Attorney General Tom Miller, the only Democratic attorney general to take part in the legal challenges to the mandate.

In a statement, Miller said he was filing at the behest of Gov. Kim Reynolds, a Republican: "It is my duty, under the law, to prosecute or defend any actions in court when requested by the governor," he said in a statement.

It's unclear whether different judges will rule on the challenges separately at first, or whether the cases will be consolidated in one court early in the process.

Several businesses and associations also joined with the states’ petitions, and some filed lawsuits on their own.

Among them are a conservative media company, two Wisconsin manufacturers, companies in Michigan and Ohio, the owner of 15 grocery stores in Louisiana and Mississippi, and a group of remote workers in Texas. All are represented by conservative law firms.

"Over the past 20 months, my employees have showed up to work and served their communities in the face of COVID and hurricanes. Now I’m being told by the government to insert myself into their private health decisions?" Brandon Trosclair, owner of the grocery store chain that employs about 500 workers, said in a statement. "That’s wrong and I won’t stand for it."

The Daily Wire media company objected on several fronts, including the idea that employers will have to track which workers have been vaccinated and treat those who have received shots differently from those who have not.

"What the government is asking us to do is discriminate against our own employee over their own personal health care decisions," said Ryan Boreing, co-CEO of the company.

So far, courts have allowed businesses on their own to require employees to be vaccinated.

But Michael Elkins, a Florida-based employment lawyer, said those decisions do not necessarily mean judges will rule the same way when it comes to the federal government's requirement.

"You may see a federal judge, or a bunch of them, say, ‘This is just overreach,'" Elkins said.

Benjamin Noren, a New York-based labor lawyer, said he thought the rule is likely to be struck down because OSHA was intended to deal with workplace hazards such as chemicals, not a virus. He said OSHA has made 10 emergency rules in the last five decades. Of the six that were challenged, only one survived intact.

"It’s an innovative use by the Biden administration to figure out some way to mandate vaccination in the private sector," Noren said. "I hope it works. I have doubts."

Ahead of the OSHA rule, several states have passed laws or issued executive orders blocking or limiting employer mandates related to the virus.

In Arkansas, Gov. Asa Hutchinson allowed such a bill to become law without his signature. It takes effect early next year and allows employees to opt out of vaccine requirements if they are tested weekly for the virus or can prove they have COVID-19 antibodies from a previous infection. Health officials say antibody testing should not be used to assess immunity against the virus and that people who have had it should still be vaccinated.

Hutchinson, however, noted that his state’s opt-out law creates a difficult scenario for businesses if both it and the federal requirement — which does not allow for antibody tests in place of vaccinations — are in effect.

"We’ve put our businesses in a catch-22," he said. "You’re going to be violating somebody’s law here."