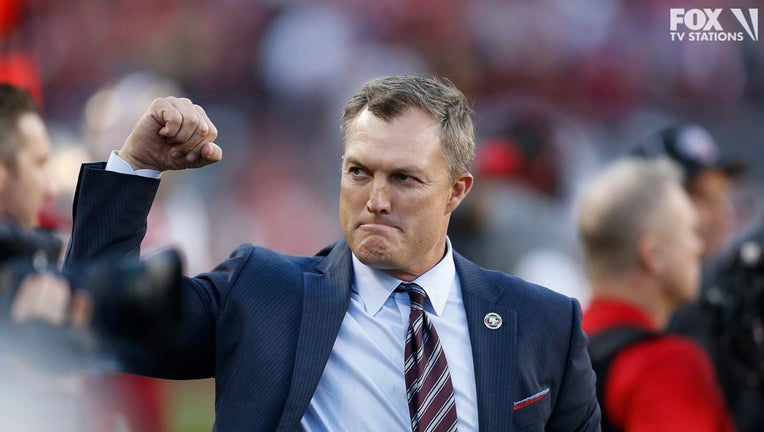 San Francisco 49ers general manager John Lynch pumps his fist during the fourth quarter of the NFC Divisional Round Playoff game against the Minnesota Vikings at Levi's Stadium on January 11, 2020 in Santa Clara, California. (Photo by Lachlan Cunning

Lynch was honored for his role in helping transform the 49ers from a four-win season in 2018 to a 13-3 record this past season. San Francisco earned the top seed in the NFC for the first time since 1997 and is playing Green Bay in the NFC championship game on Sunday.

The Niners are just the sixth team to make the conference title game in the Super Bowl era a year after winning four or fewer games. Their nine-game improvement was the best in franchise history.

Lynch was hired along with coach Kyle Shanahan in 2017 and has played a part in rebuilding the franchise with trades for players such as Jimmy Garoppolo, Dee Ford and Emmanuel Sanders; the drafting of players Nick Bosa and George Kittle; and free agent signings such as Richard Sherman.

Lynch is the third 49ers executive to win the award since it was established in 1993. Carmen Policy won in 1994 and Trent Baalke in 2011.