An eight-story larger than life artwork celebrating Ruth Bader Ginsburg is going up on a building in San Jose.

SAN JOSE, Calif. - A tribute to the late Supreme Court Justice Ruth Bader Ginsburg is being erected in the heart of Silicon Valley.

As the presidential inauguration is set to take place in Washington, D.C., a Stanford graduate is planning to put the finishing touches on a five-story public art piece of RBG on the side of the building at 2 West Santa Clara Street in downtown San Jose.

Work was slightly delayed on Tuesday because of the high winds.

The piece is an original by San Bruno-based artist Chuba Oyolu, 38, a Stanford alum and former biomedical engineer and molecular biologist.

Oyolu, who is a scientist by day and only considers himself a "moonlighting artist," said he wanted to capture Ginsburg's "sophisticated and playful" attitude in her larger than life masterpiece.

"I'm a scientist by training, but I'm an artist at heart," he said. "A lot of people look at me and call me weird. Somehow, I'm able to do both." 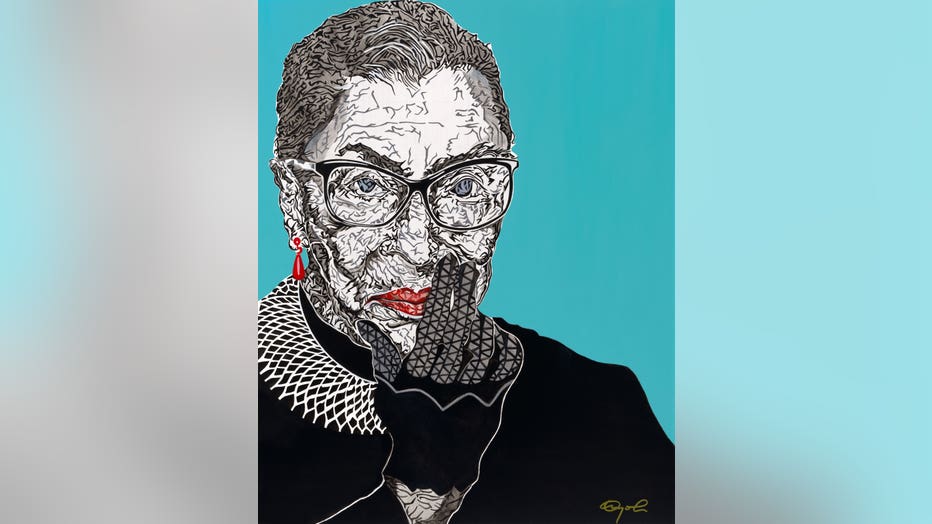 A tribute to Ruth Bader Ginsburg will be illuminated in San Jose. The piece was commissioned by DivcoWest and created by artist Chuba Oyulu.

He said it took him six weeks to create the mural, which was done in his home studio. The installation began last week and is almost complete.

Inspired to pick up a brush by Michelangelo, he developed his own style of what is known as "geometric symbolism," a method he finds attractive as a scientist because the medium allows you to "break down every problem into parts."

Oyolu said he's only been creating art professionally for about a year and a half. His body of work includes other iconic figures he considers to be heroes: Muhammad Ali, Steve Jobs, Jimi Hendrix, Prince and Bruce Lee.

As for his thoughts on Ginsburg, who died in September: "She picked a mission in life and she kept working on it. Whether you agreed with her or not, her ethic is to be admired."

Oyolu said he hopes the 85-foot high installation will be an inspiration to all who see it. It will be visible throughout downtown San Jose and illuminated at night. 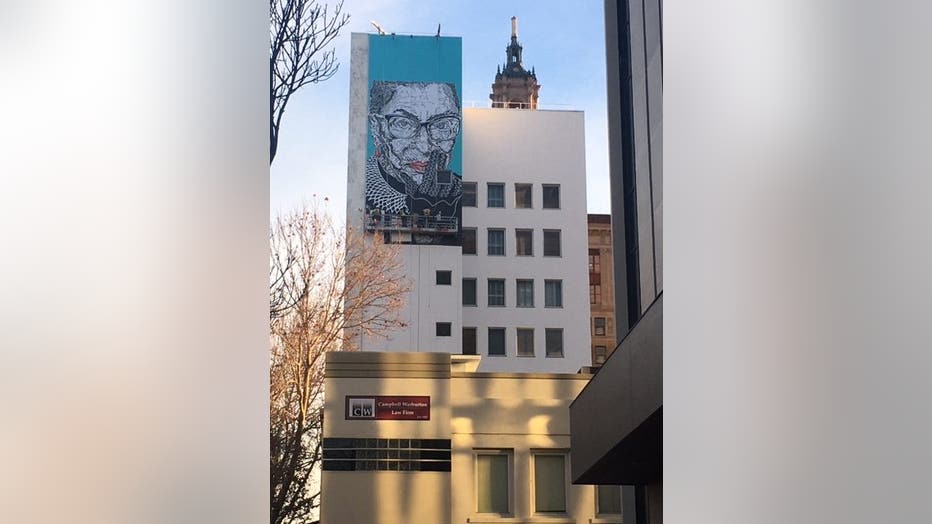 A tribute to Ruth Bader Ginsburg will be illuminated in San Jose. The piece was commissioned by DivcoWest and created by artist Chuba Oyolu.

The piece will be 80 feet higher than Ginsburg was in real life. Known for her fiercely liberal opinions, the tiny Ginsburg stood only 5 feet 1 inch tall.

"(She was) really a hero. Somebody who had ideals and worked tirelessly for decades to see those ideals come to fruition," Oyolu said.

The artist said it is by far the largest piece he's ever done, catching the eye of many in San Jose including the mayor.

"It's a time of great suffering. We all need to take time to exhale, take a breath and look up and enjoy something beautiful," said San Jose Mayor Sam Liccardo.

The artwork was commissioned by the building owner, DivcoWest, a private real estate investment firm headquartered in San Francisco. Oloyu declined to say how much he was paid for his creation.

The 1910 building used to be the old First National Bank, and then the Bank of the West headquarters.

"RBG was more than a justice of historic stature, she remains a true American hero," said Heather Meyerdirk, managing director and head of capital strategies at DivcoWest. "As such, we hope that Chuba Oyolu's beautiful artwork will inspire the San Jose community and beyond for years to come."