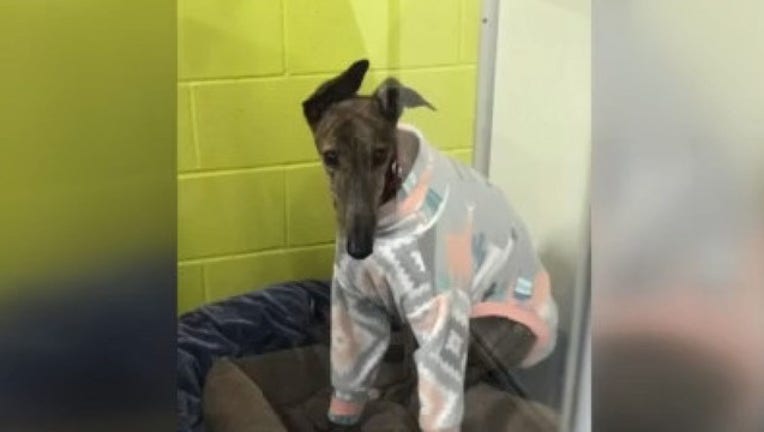 AUSTIN,Texas (FOX 7 Austin) - It's been quite the journey for the five year-old greyhound known now as Maya.

She along with four other greyhounds were rescued from a Macau China dog racing facility that closed last July.

Volunteers in Macau China and in the U.S. are working to rescue more than 500 greyhound dogs who were abandoned after the closure of Asia's only legal dog racing track.

"Years ago there's been a lot of social media push through organizations to end close down that track because it was known as the death camp for dogs, death camp for greyhounds most dogs that go there don't come out of there,"  said Sandi Reinlie with Greyhound Rescue Austin.

More than a week ago a group of volunteers traveled to Houston to greet the dogs who were flown in from China.

The greyhounds have since been placed in foster homes until they're ready to be put up for adoption.

Maya's foster mom Brooke Hummel says it's heartbreaking to know what these dogs have gone through.

"These dogs are abandoned in mass groups like that and there are going to be ones that aren't healthy and unfortunately those get euthanized or sold into the dog meat festival so that's always are first concern," said Hummel.

Reinlie says many of the dogs rescued were under weight and in poor condition.

She says the greyhounds not only were saved from terrible living conditions they're also escaping China's dog meat market.

"Four hundred dogs were euthanized for having an injury dogs that don't do well there unfortunately end up in the dog meat trade they eat them in China," said Reinlie.

According to animal-rights group's dog meat consumption in China has been declining since the beginning of the 21st century, but around 20 million dogs are still being killed for meat in the country each year.

More greyhounds rescued from the Macau facility have made their way to New York to be fostered.

They're being flown to other rescue organizations throughout the world to find forever homes.

"We are trying to find great loving homes so they can spend their retirement in," said Reinlie.

Hummel says she hopes these pups will finally be able to lead normal lives and learn what being man's or woman's best friend is all about.

"Unfortunately they've had a rough start but they're going to really loving homes," said Hummel.

To find out how you can help visit http://www.greyhoundrescueaustin.com/.

Foreign countries aren't the only ones involved in greyhound racing.

In U.S.  Florida just recently voted in favor of a greyhound-racing ban, eliminating 11 of America's 17 remaining dog tracks by the end of 2020.