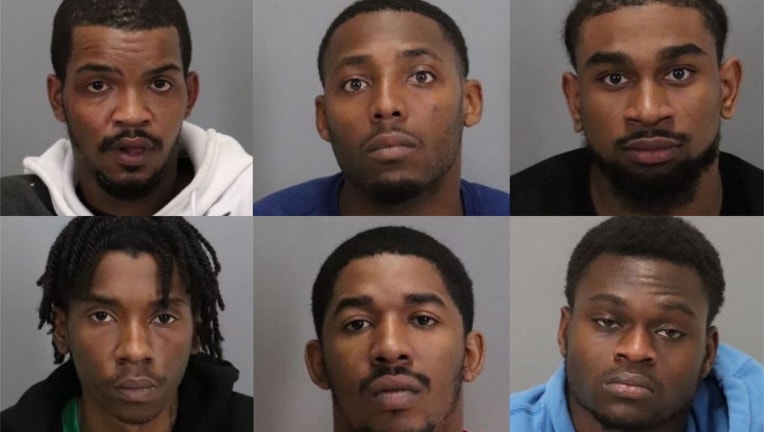 SAN JOSE, Calif. - San Jose police on Wednesday announced the arrest of six men who allegedly committed dozens of robberies, burglaries and thefts since last year, including many that targeted people of Asian descent.

The suspects have been charged for more than 70 cases that occurred between October 2020 and this September, and hate crime enhancements have been added because the men frequently targeted Asian women, some of whom ended up injured in robberies, police said.

The six have been identified as Anthony Robinson, 24, of Stockton; Cameron Moody, 27, of East Palo Alto; Derje Blanks, 23, of San Jose; Hassani Ramsey, 24, of Oakland; Clarence Jackson, 21, of East Palo Alto; and Malik Short, 21, of Tracy, according to police.

Some incidents were captured on surveillance video. Footage shows men blocking victims who are sitting in parked cars before they snatch purses from the front seat. In other cases, the suspects smashed car windows, police said.

The men looked for victims near ATMs, casinos and Asian markets. One victim had $30,000 stolen from her.

Many firearms, including a ghost gun, were also recovered as part of the investigation.

Authorities spoke about the investigation at a restaurant in San Jose's Little Saigon neighborhood.

"Unfortunately, these incidents, over 100 throughout the Bay Area were committed by some individuals," said San Jose Police Chief Anthony Mata.

Santa Clara County District Attorney Jeff Rosen said the defendants "thought Asian women don't use banks, and they also made some other ethnic slurs against Asians which I won't repeat here."

San Jose City Councilmember Maya Esparza said, "The city of San Jose stands together to ensure the safety of people here in Little Saigon. We will not stand for hate crimes here, at all."