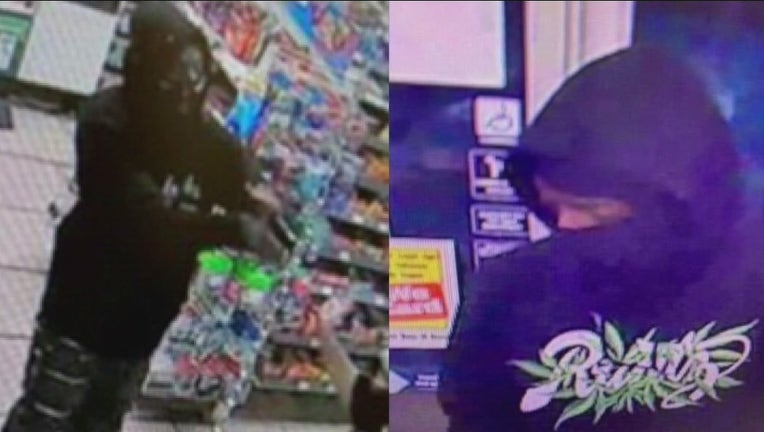 The Los Angeles Police Department is looking for the man they say held up four stores in the North Hills area late last week. Because two of those stores were 7-Eleven locations, officials are investigating whether that same man is responsible for th

LOS ANGELES, Calif. - The manhunt continues for the man responsible for a string of armed robberies at several 7-Eleven locations across Southern California earlier this week that left two people dead and several others injured. Now, 7-Eleven's parent company is offering a $100,000 reward for info leading to that suspect's arrest.

The deadly string of armed robberies began early Monday morning just after midnight at a store in Ontario. Police say the suspect walked into the store with a gun and demanded money from the cashier, before fleeing. Five more 7-Eleven locations were attacked over the next five hours in Upland, Riverside, Santa Ana, Brea and La Habra. Police have confirmed the same suspect is wanted for at least five of those six robberies.

Two people died in the attacks. In Brea, 40-year-old store clerk Matthew Hirsch was shot and killed, while a 24-year-old man, later identified as Matthew Rule, was shot in the parking lot of the Santa Ana store. Rule was not a 7-Eleven employee. The same suspect is wanted for both Hirsh and Rule's deaths. He's described as being around 5 feet 10 inches tall and weighing approximately 160 pounds.

The string of robberies forced 7-Eleven to recommend local stores — which are typically open 24/7 — to shutter overnight.

On Tuesday, the Los Angeles Police Department announced it's also investigating a similar string of armed robberies in North Hills. Police say that one man robbed two 7-Eleven stores and two donut shops overnight the morning of July 9. Because two of the stores in that spree were 7-Eleven locations, officers are trying to determine whether the suspect is the same man who went on Monday morning's robbery spree.

7-Eleven issued a statement to FOX 11 earlier this week saying, "Our hearts are with the victims and their loved ones. We are gathering information on this terrible tragedy and working with local law enforcement."

Anyone with information about the suspect in these robberies is asked to contact police.