More than 70 people were shot and at least 14 others killed in shootings this weekend in Chicago.

CHICAGO - Fifteen people were killed and 64 others wounded in shootings across Chicago over the Fourth of July weekend.

President Trump reacted to shootings in two big cities in a tweet Sunday evening. “Chicago and New York City crime numbers are way up. 67 people shot in Chicago, 13 killed. Shootings up significantly in NYC where people are demanding that @NYGovCuomo & @NYCMayor act now. Federal Government ready, willing and able to help, if asked!”

Eleven of the weekend’s victims were minors, and two of the children died from their injuries.

A 14-year-old boy was among four people killed in a shooting that wounded four others Saturday night in Englewood on the South Side.

They were at a large gathering in the street about 11:35 p.m. in the 6100 block of South Carpenter Street when four males walked up and started shooting, according to Chicago police. The 14-year-old boy was hit in the back and pronounced dead at Comer Children’s Hospital. 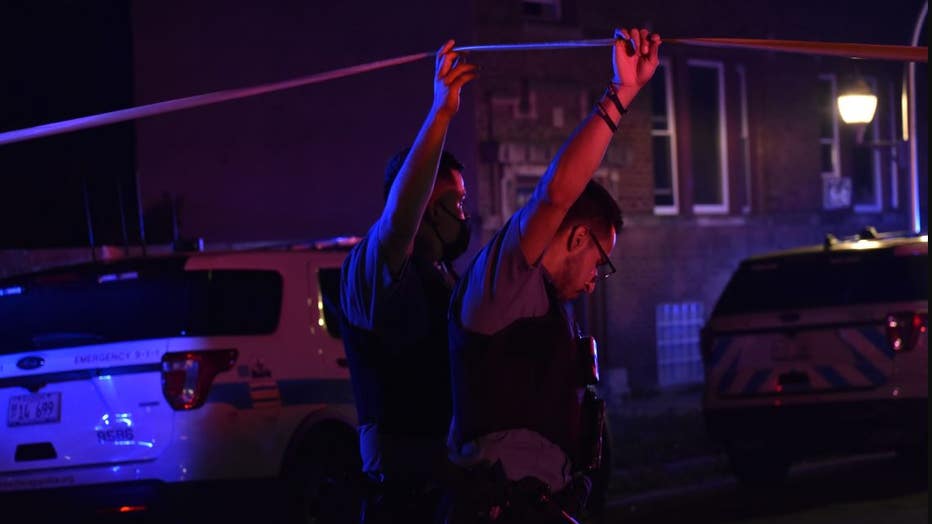 Police investigate after eight people were shot, four of them fatally, July 4, 2020, in the 6100 block of South Carpenter Street. | Carly Behm/Sun-Times

Three other male victims were pronounced dead, two at the scene and one at the University of Chicago Medical Center, police said. Their ages were not immediately known.

Earlier that evening, a 7-year-old girl was killed at a Fourth of July party in Austin on the West Side.

The girl was playing on a sidewalk about 7 p.m. in the 100 block of North Latrobe when three men got out of a white car and shot more than 20 rounds in the direction of the people holding the party, a group which included many children, police said.

The girl, identified by family and the Cook County medical examiner’s office as Natalia Wallace, was struck in the forehead, and a 32-year-old man was injured.

“Tonight, a 7-year-old girl in Austin joined a list of teenagers and children whose hopes and dreams were ended by the barrel of a gun,” Mayor Lori Lightfoot said in a statement on Twitter. “We cannot grow numb to this. We are making progress in slowing shootings, but we have to do better, every single one of us.”

The latest fatal attack left a 39-year-old man dead in Lawndale on the West Side.

Sterling R. Pledge Jr. was found unresponsive about 2:27 a.m. in the 900 block of South Independence Boulevard, authorities said. He had a gunshot wound to the chest and was pronounced dead on the scene.

A 26-year-old man was shot dead Sunday afternoon on the Near North Side.

Kenric D. Campbell was shot about 12:45 p.m. in the 1400 block of North Kingsbury Street, authorities said. Campbell, who lived on the Near West Side, was rushed to Illinois Masonic Medical Center, where he died.

Early that morning, a man was shot to death in Gresham on the South Side.

The 21-year-old was standing on the sidewalk about 2:15 a.m. in the 8600 block of South Vincennes Avenue when he was shot in the head, police said. He was pronounced dead at the scene.

About an hour before that, a woman was killed and five men were injured when someone fired into a crowd that was setting off fireworks in Lawndale on the West Side.

The group was lighting fireworks on the sidewalk at 1:14 a.m. in the 1500 block of South Millard Avenue when a white vehicle approached and someone inside started shooting, according to police. A 20-year-old woman was hit in the head and abdomen and taken to Mount Sinai Hospital, where she was pronounced dead.

Less than an hour earlier, a man was killed and another was injured in Riverdale on the Far South Side.

They were in a parking lot when they got into an argument with the male suspect about 12:35 a.m. in the 1000 block of East 132nd Street, according to police. The suspect left the parking lot and walked to a home before firing at the men through the door.

A man was killed and three others were injured late Saturday night in South Chicago.

They were standing on the sidewalk at 11:09 p.m. in the 8300 block of South Kingston Avenue when they heard gunshots and realized they were hit, according to police.

Cartrell Tate, 39, was hit in the head and taken to the University of Chicago Medical Center, where he was pronounced dead, authorities said.

Another man was killed and two people were hurt in a shooting earlier that evening in South Shore.

They were standing on the sidewalk about 9:43 p.m. in the 2700 block of East 75th Street when someone in a blue SUV fired shots, police said. Tyrone Long, 33, was shot several times in the chest, authorities said. A friend drove him to Jackson Park Hospital, where he died.

Another man, 44, was hit in the thigh and taken to the University of Chicago Medical Center in fair condition, police said. A 27-year-old woman was grazed on the ankle and declined medical treatment.

Saturday morning, a 30-year-old man was gunned down in Englewood on the South Side.

About 7:15 a.m., Michael P. Means was sitting in the driver’s seat of a parked vehicle in the 6400 block of South Hoyne Avenue, when someone inside a dark-colored SUV began firing shots in his direction, authorities said. Means, who lived in Roseland, was struck in the chest, neck, right arm and rushed to the University of Chicago Medical Center where he was pronounced dead.

A couple hours before that, a shooting left a woman dead and two men injured near 31st Street Beach on the South Side.

They were walking about 5:20 a.m. in the 3100 block of South Lake Shore Drive when a group of about six males approached, authorities said. Three or four members of the group distracted 34-year-old Quentella Smith while two other suspects pulled out guns and started shooting at her and the two men she was with. Smith was hit in the head and pronounced dead at the scene.

A 26-year-old man was shot in the right leg, thigh and torso, police said. He was taken to the University of Chicago Medical Center, but his condition was not immediately known. The other man, 32, was grazed on his left leg and taken to Northwestern Memorial Hospital in good condition.

Hours earlier, one man was killed and another was critically hurt in Englewood on the South Side.

A 20-year-old man was in a business about 1:55 a.m. in the 6600 block of South Halsted Street when someone fired multiple gunshots, according to police. He was hit several times and taken to the University of Chicago Medical Center, where he died a short time later.

The other man, 49, was in a vehicle nearby when he was hit in the left thigh, police said. He was taken to the same hospital in critical condition.

A 15-year-old boy shot Sunday evening was the latest minor to be injured by gun violence in Chicago.

He was walking about 10:45 p.m. in the 2900 block of South Federal Street when two males approached him, police said. One of them fired shots before they both fled. The boy was hit in the hand and taken to Comer Children’s Hospital in fair condition.

He was outside about 6 p.m. in the 3100 block of South Karlov Avenue when someone in a gray vehicle pulled up and opened fire, police said. The boy was shot in the shoulder and taken to Mt. Sinai Hospital, where his condition was stabilized.

A 16-year-old girl was among a group of people who were shot Sunday in Fifth City on the West Side.

About 2:30 p.m., she was standing in an alley in the 3700 block of West Jackson Boulevard with three other people when they heard shots, Chicago police said.

A 55-year-old man and a 35-year-old man were each struck in the buttocks, police said. The older man was taken to Mt. Sinai Hospital in good condition and the younger man refused treatment.

A man and a teenage boy were injured in a shooting early Sunday in University Village.

The 17-year-old boy and 19-year-old man were sitting on a porch with a group of people at 1:37 a.m. in the 1200 block of West Hastings Street when someone fired shots from a gray or silver vehicle, according to police. The 17-year-old was shot in the hand while the 19-year-old was hit in the arm. Someone drove them both to Stroger Hospital, where they were listed in fair condition.

Less than an hour before that, a 17-year-old girl was wounded on the Near West Side.

She was riding in a vehicle about 1 a.m. in the 2600 block of West 15th Street when two males fired shots, according to police. She was hit in the left shoulder and taken to Stroger Hospital in good condition.

About two minutes earlier, a 10-year-old girl and a 48-year-old woman were shot in West Rogers Park on the North Side.

They were standing in the hallway of an apartment building at 12:58 a.m. in the 7400 block of North Artesian Avenue when a male fired shots through a door, according to police. The child was grazed on her right hand and taken to Saint Francis Hospital in Evanston in good condition. The woman was shot in both legs and taken to the same hospital in serious condition.

On Saturday night, a 15-year-old boy was one of three people injured in a Little Village drive-by.

Someone in a passing vehicle opened fire at two men about 10:25 p.m. as they stood in an alley in the 2800 block of South Keeler Avenue, police said. One man, 23, was struck in the shoulder and taken to Mount Sinai Hospital in serious condition. A 27-year-old man was shot in the leg and taken to the same hospital in fair condition.

The 15-year-old boy was in an alley in the 3000 block of South Tripp Avenue and was hit in the knee by a stray bullet, police said. He was taken to Stroger Hospital in fair condition. Police said the boy doesn’t know the men and was not with them when they were shot.

On Friday evening, three more people — including another 15-year-old boy — were injured in a shooting in South Chicago.

They were standing on a sidewalk about 8:52 p.m. in the 8900 block of South Exchange Avenue when shots rang out, police said. The teen was struck in the arm and taken to the University of Chicago Medical Center in good condition. A man, 18, was shot in the legs while a 23-year-old woman was struck in the arm and torso. They were taken to the same hospital in fair condition.

At least 28 other people have been wounded in citywide shootings between 5 p.m. Friday and 5 a.m. Monday.

Last weekend, 65 people were shot across the city, 18 of them fatally.