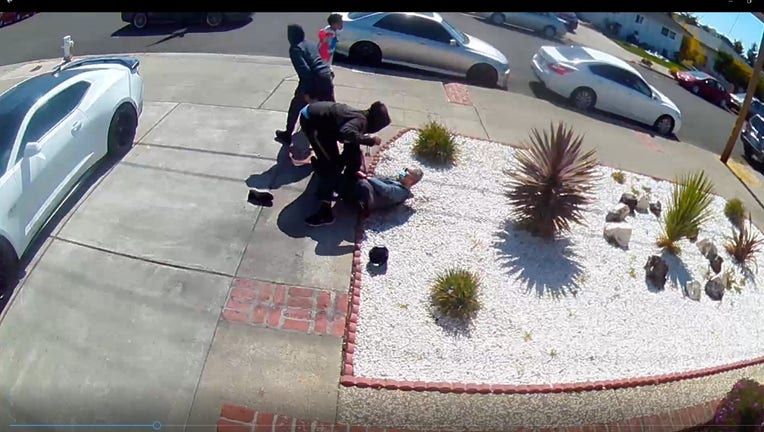 An elderly Asian man was attacked on Acapulco Road in San Leandro on Saturday, May 8, 2021. Police are still looking for the suspects (Photo courtesy of San Leandro PD)

SAN LEANDRO, Calif. - A group of teenagers attacked and robbed an elderly Asian man as well as another victim in San Leandro on Saturday, but police said Tuesday that there is no indication that the case was a hate crime.

The 80-year-old Asian victim was attacked around 4 p.m. while out for a walk in the 14200 block of Acapulco Road, where the teenagers pushed him to the ground and demanded his wallet, according to police.

San Leandro police released video of an 80-year-old man of Asian descent being robbed by three teenagers over the weekend. Police say the same trio is responsible for the robbery of a 19-year-old woman after this video was taken.

But the victim repeatedly yelled, "Help!" and one of the teenagers removed the victim's Fitbit wristband by force. Another boy can be heard giggling in surveillance video. They fled in a blue Subaru Legacy with black and silver rims. The victim reported minor injuries but did not require further medical attention, police said.

"It is absolutely heart-wrenching to see the surveillance and to hear the victim screaming for help," said San Leandro police Lt. Ali Khan. "Very frustrating to hear the suspects essentially laughing off a very serious crime."

At about 5:45 p.m. the same day,  police say the same group of teenagers robbed a 19-year-old Hispanic woman of her purse in the 500 block of Bancroft Avenue.

San Leandro police said a study found a 283 percent increase in violent crimes against Asian community members in the city in 2020 compared to 2019.

Khan said there is no indication that Saturday's victim was targeted due to his race, but investigators have not ruled anything out.

"We don't know if there was any epithets that were hurled towards the victim, however, we're not discounting it," Khan said.

San Leandro Mayor Pauline Russo Cutter said, "It just breaks my heart to see this kind of behavior. It's a very cowardly thing to do. How do you justify that? I don't know. How do you feel that you're better than somebody to be able to hurt them?"