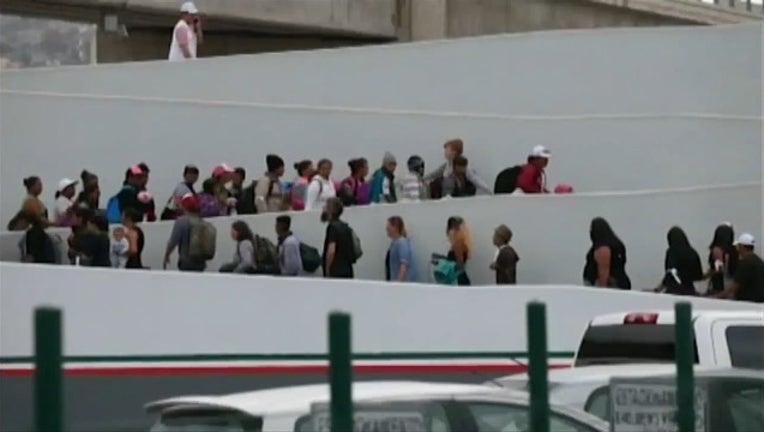 SAN FRANCISCO - A U.S. Department of Justice lawyer defended a restrictive asylum rule by the administration of President Donald Trump in arguments before a federal appeals court in San Francisco Monday.

Federal attorney Scott Stewart told a panel of the 9th U.S. Circuit Court of Appeals, "Given the overwhelming strain that we as a country are facing of migration, this is a reasonable tool ... to find a lasting solution to what is a very challenging situation."

The rule issued in July bars migrants who have passed through another country to reach the U.S.-Mexico border from applying for U.S. asylum unless they have sought and been denied asylum in the transit country.

The government is appealing a preliminary injunction by U.S. District Judge Jon Tigar of Oakland that would block the rule. In September, however, the U.S. Supreme Court issued a stay that allowed the rule to go into effect until all appeals are completed, including any appeal to the Supreme Court of the 9th Circuit's eventual decision.

Gelernt, representing the groups, argued that Mexico and Guatemala, the potential transit countries for Central American asylum seekers, are dangerous and there is no evidence that migrants could find safe asylum there.

Stewart, a deputy assistant U.S. attorney general, contended that failing to apply for asylum in a transit country showed a lack of urgency on the part of asylum seekers.

He also argued that the rule was within the administration's discretion to set regulations carrying out asylum laws.

But at least two judges on the three-judge panel, Circuit Judges William Fletcher and Richard Clifton, expressed concern that the rule was not consistent with a congressional law setting forth asylum eligibility.

Fletcher commented, "It is not entirely discretionary as to whether someone is determined to be eligible."

The attorneys also clashed over whether Tigar had the authority to issue a nationwide injunction, as opposed to one that applies only in the nine states within the 9th Circuit, including California and Arizona. Gelernt contended a nationwide order was appropriate because the groups operate throughout the country.

"I have to tell you, my fear is that you'll get exactly what we got: the Supreme Court saying, 'We're not going to let one district judge someplace make a (nationwide) rule,' so we wind up with a stay that doesn't even let that court speak to its own territory," Clifton said.

The panel took the case under submission and will issue a written ruling at a later date.